Amid the hugging, dancing, and other reunion hoopla on Saturday, a half-dozen members of the Class of 1980 reflected on how their careers have meandered and zigzagged over the past 35 years. In the shade of a tent on a sunny Pembroke Field in the afternoon, Barbara Laskey Weinreich moderated, “Second Acts: Changing Course,” a discussion among six classmates about their careers, all of which have taken unexpected turns. 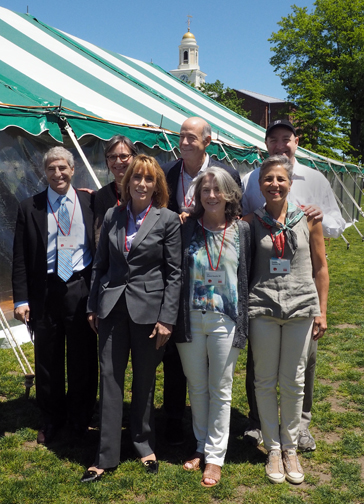 Liz Kellner Suneby, a marketing consultant, was inspired by her daughter to begin writing books for children and teens about ten years ago. Her most acclaimed book, Razia’s Ray of Hope—based on a true story about an Afghan girl yearning to attend school—has earned nine awards and taken Suneby around the country to lead workshops on the importance of education as a human right.

Maggie Wood Hassan, now in her second term as governor of New Hampshire, entered public service while advocating for her son, who has severe disabilities. (She and her husband, Tom Hassan ’78, are also parents to Meg Hassan ’15.) A lawyer by training, Maggie served as a state senator for six years before running for governor. Asked about the biggest surprise of shifting careers, she replied, “How much I love the job [of governor]. It’s phenomenal.”

After many years as an advertising and Internet marketing executive, David Riemer (parent of Taryn Riemer ’15) gave up full-time office work to pursue his passion for telling stories. Today he helps entrepreneurs, business students, and artists “get their story straight” and, among other projects, is producing a musical by singer-songwriter Bruce Hornsby.

Ten years ago Rachel Balaban was designing clothes and raising three daughters with her husband, John Burnham ’78, when she wondered, What’s next? "I needed to feel I was making a difference,” she said. She began teaching dance to people with Parkinson’s Disease and then co-founded a Brown-based program, Artists and Scientists as Partners, that promotes research and teaching on the healing value of the arts.

In 2012 Larry Kramer became president of The William and Flora Hewlett Foundation, where he helps give away $450 million a year to address global poverty, climate change, and other pressing problems. He took the job after many years as a university law professor and then dean of Stanford Law School. Looking ahead, Kramer said, “I expect to have a third act, but I have no clue what it’s going to be.”