For the past decade, multimedia artist Saya Woolfalk ’01 has been creating a sci-fi fantasy world peopled by a race of women known as the Empathics. Through painting, sculpture, video, and performance, she documents this utopian society using bright—almost neon—colors, richly patterned fabrics, elaborate headdresses, face paint, and wings made of multilayered petal-shaped cloth. A New York Times reviewer describes it this way: “A West African masquerade version of Mozart’s ‘Magic Flute,’ with Tibetan tantric overlays, might look something like a Saya Woolfalk installation.” 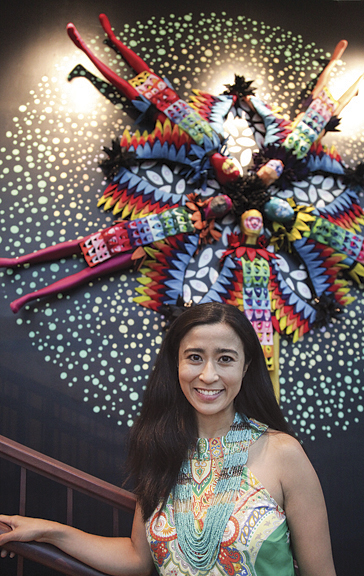 Courtesy Saya Woolfalk
Saya Woolfalk '01 with her installation titled Star Compulsion.
The international comparison is apt. After college at Cornell and Brown, and graduate school at the School of the Art Institute of Chicago, Woolfalk studied folkloric performance traditions in northeastern Brazil on a Fulbright grant. “A lot of the traditions I was studying were Afro-Brazilian,” she says. “African masquerade traditions have deeply impacted and inspired my work.” Her art is part of the multi-artist exhibit “Disguise” at the Seattle Art Museum through September 7. “Disguise” will be shown at the Fowler Museum at UCLA from October 18 to March 13, 2016, and the Brooklyn Museum from April 22 to September 11, 2016.

After returning from Brazil, Woolfalk spent two years collaborating with anthropologist Rachel Lears on Ethnography of No Place, a video chronicling her fictional utopia. From that emerged the story of the Empathics, women who unearth old bones from human-plant hybrids. A fungus on the bones releases spores that trigger the women’s own interspecies hybridization, causing them to grow a second head (to house a plant brain) and have mind-expanding visions. (This part of the story, Woolfalk says, grew out of a conversation with a biologist about ant behavior.) The Institute of Empathy even has its own website, instituteofempathy.org, which explains the basics of the Empathics story. The world of the Empathics was documented in a solo exhibition at the Montclair Art Museum in 2012.

Making art started at a young age for Woolfalk. Born in Japan to a Japanese mother and an African-American and Caucasian father, she grew up in Scarsdale, New York. Formal training in drawing and painting started in first grade and continued through high school. Wanting to “study multiple things,” she transferred to Brown from Cornell after one year and concentrated in both Visual Arts and Economics.
“Maybe because I’m black, white, and Japanese,” she says, “I’ve always attempted to be interdisciplinary and had so many interests because I’m trying to capture information from multiple places.”

Her current work focuses on the next phase of the story: the Empathics’ formation of a corporation called ChimaTEK. “What I’ve been trying to do with ChimaTEK,” Woolfalk says, “is fuse the utopian and dystopian.” A video of a mock pharmaceutical ad with a New Age soundtrack declares, “ChimaTEK’s patented system makes our interspecies and intersubjective hybridization available to all.”

“What happens when that utopian drive dovetails with corporate culture and commodity culture?” she asks. “Can it still exist?”

Woolfalk will speak on campus November 5–6 as part of Brazenly Brown, a series of lectures by alumni in the arts.
What do you think?
See what other readers are saying about this article and add your voice.