If you’ve ever thought the videogame Minecraft was a waste of your kid’s time, think again—a Brown researcher is using the game as the basis to create a robot with artificial intelligence. 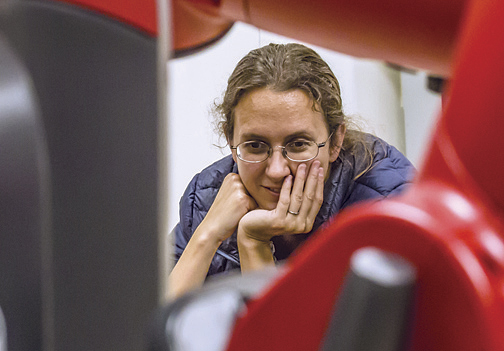 Mike Cohea
Tellex in her lab. She wants robots to understand humans better.
Minecraft lets players construct three-dimensional worlds out of blocks. The graphics look basic, but it has been used to create models of modern cities, Disneyland, and the spaceship from Battlestar Galactica.

Stefanie Tellex, an assistant professor of computer science, was interested in the most basic version of the game, where blocks are put together to create a small patch of land.

There is also a trench. The computer is programmed to cross the trench by pushing a block to create a bridge. But then, in effect, it is on its own. The researchers changed the environment, moving the trench. The computer needed to adapt. This is what computer scientists mean by artificial intelligence, albeit in a rudimentary form.

The problem with robots today is that they can be programmed to perform specific functions, but they can’t cope very well with changes in the environment or commands they haven’t heard before.
After her algorithm proved successful in Minecraft, Tellex used it to program a robot she has in her lab. Now the task wasn’t to cross a trench, but to help a person bake brownies. The robot learned a basic rule, such as eggs are beaten with a whisk. Then, when presented with a carton of eggs, it knew it needed a whisk.

For robots to be of use to humans, they need an expansive understanding of human behavior. It would be impossible to write a program that spelled out what the machine should do in each individual circumstance. We’ll never have the computing power for that. Instead, the robot must be able to do what the one in Tellex’s lab did: to grasp the larger context in which its human master is operating and react.

Researchers are far from achieving full-on artificial intelligence, but Tellex is just beginning. “The whole of Minecraft is what we refer to as ‘A.I. complete,’” she says. “If you could do all of Minecraft, you could solve anything.”
What do you think?
See what other readers are saying about this article and add your voice.