It’s a rare act that can say it literally brought down the house. But earlier this year Riders Against the Storm (RAS)—a hip-hop duo composed of Jonathan “Chaka Mpeanaji” Mahone ’99, ’04 MAT, and his wife, Ghislaine “Qi Dada” Jean—attracted so large a crowd for their monthly dance party at the Sahara Lounge in Austin, Texas, that a section of the ceiling began to give way. 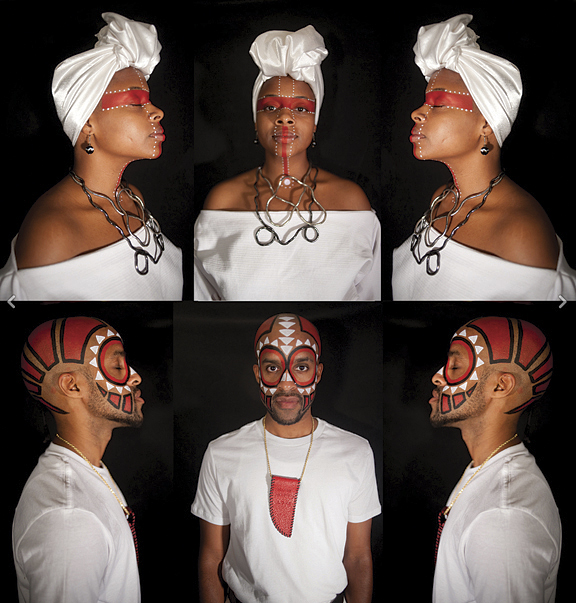 Photo: Deleigh Hermes
Jonathan Mahone '99, '04 MAT, and his wife, above.
If the audience that February night is any indication, Austin-based RAS is on track to graduate from a local act to a national one. With whip-smart lyrics that deconstruct class divides as unforgivingly as they shred unrealistic beauty standards, their music doesn’t shy away from tackling big issues. Their name—a riff on a Sweet Honey in the Rock lyric from Ella’s Song, which honors civil rights activist Ella Baker—pays tribute to a long history of artists and activists who have taken a stand.

But for all the seriousness of their message, RAS is fun. Chaka and Qi are like the ultimate party hosts, all vivid colors and uninhibited dance moves. This combination has drawn the admiration of the local music scene. Deborah Sengupta Stith, music writer for the Austin American-Statesman, lauded RAS’s 2013 self-titled EP as “a revelation, equal parts exorcism and call to action brilliantly cloaked in dance floor banging beats and catchy hooks.” Not only was RAS the first hip-hop act to win Band of the Year at the Austin Music Awards; they’ve snagged the title two years running.

The City of Austin even declared August 29, 2013, RAS Day to celebrate the band’s mantra of self-love—a date the community still commemorates with an annual festival and show. “This day is about receiving,” Chaka explains. “It’s about coming and getting something for yourself.”

This is the philosophy the pair cultivated during their years as community organizers. Chaka, who wrote his undergraduate honors thesis on using hip-hop in the classroom, directed an after-school arts program in Providence after earning his degree in American Civilization. He met Qi, and in 2003 they recorded their first songs together. In 2009 they moved to Austin to focus solely on music and found success there. RAS has two major Texas festivals this fall—UTOPiAfest in September and the Austin City Limits Music Festival in October. Their second full-length album is also due out this fall.

“You need joy, you need laughter, you need good high vibrations to keep going with the work, otherwise you do end up feeling tapped out,” Chaka says. “That definitely happened to us as organizers, and we realized that our true gift is really bringing people’s spirits up.”
What do you think?
See what other readers are saying about this article and add your voice.

Reader Responses to Taking a Stand