“It’s hard to believe they are gone,” wrote John Maxtone-Graham ’51 in the foreword to his 1972 The Only Way to Cross, a proudly nostalgic history of the great transatlantic ocean liners. “The piers are still there,” he added, “But there is no tomorrow.” 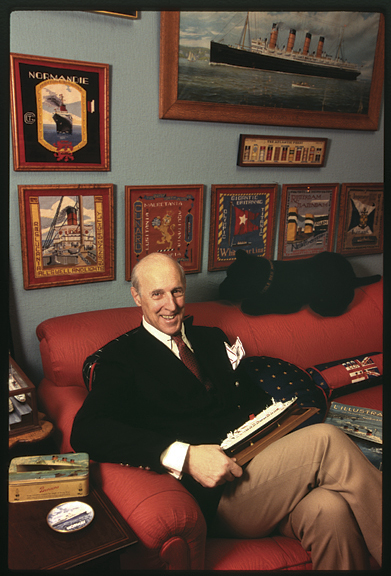 For readers with a nautical bent, just as hard to imagine is a world without Maxtone-Graham himself. Steamships of all sorts will seem adrift without the deck-prowling presence of the author recognizable for his pocket kerchief and double-breasted blazer.

In books like Liners to the Sun, Cunard:150 Glorious Years, Normandie: France’s Legendary Art Deco Ocean Liner, and Titanic Tragedy: A New Look at the Lost Liner, Maxtone-Graham was after something more than the sweep of a hull, the churn of an engine, or the way a big ship pitched or rolled at sea. His writing evoked the routines of shipboard life, the daily experiences of generations of travelers before the jet age buzzed in.

Anthony Nicholas, a travel and cruise blogger, wrote that he “did not read The Only Way to Cross and its follow-ups so much as devour them. [Maxtone-Graham’s] books were crafted with the same loving care and exquisite attention to detail as the great ships that he wrote about.”

By the time he was ten years old, Maxtone-Graham had crossed the Atlantic a dozen times, and though he remembered getting seasick many times aboard Cunard and White Star liners, he was typically allowed to explore these vast ships on his own. “There used to be buttons to summon stewards,” he liked to recall, “and there was always someone available in the pantry. I was amazed to discover the food was free.”

Maxtone-Graham once told a correspondent from Cruise Critic, “On ocean crossings there is a feeling that the passenger, crew and ship are going somewhere, not drifting around.” He especially looked forward to the end of a day in port, “when the sun is setting and ships leave port together.… Every passenger on every leaving ship is a fellow passenger with you. There’s a kind of mystical quality of the sunset sail, a serenity in the moment.”

After graduation, Maxtone-Graham served with the marines in Korea and forged a career as a Broadway stage manager. His credits included a production of King Lear with Orson Welles and The Night of the Iguana starring Bette Davis. He soon branched out into writing about ships, which led to lecturing gigs on board Cunard, Princess, and Norwegian Cruise Line vessels, as well as the opportunity to spend months out of each year at sea.

Thanks, in part, to one of his sons, Ian Maxtone-Graham ’83, a longtime writer and producer for such television shows as Saturday Night Live and The Simpsons, Maxtone-Graham capped off his show-business career with a 2012 appearance on an episode of the The Simpsons titled “A Totally Fun Thing That Bart Will Never Do Again.” Bart is among those listening when Maxtone-Graham, in top form and high sartorial style, lectures on board the fictional Royal Valhalla, perfectly  in character.