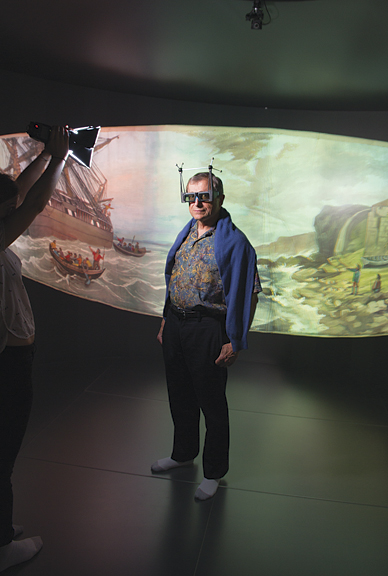 Photo: Mark Ostow
One day during the 1960s, long before thumb drives and the cloud, long before even random access memory, computer scientist Andy van Dam stood, filled with awe and wonder, in a room at the University of Pennsylvania. A Swarthmore-trained electronics engineer, he had immigrated to the United States from Holland with his parents in 1952. Now, all around him were mercury delay lines—spiked silver cylindrical tubes filled with liquid mercury. These were the beginnings of computer memory.

Electrical pulses were turned into sound waves and sent through these long tubes of mercury to be re-electrified at the other end. Collectively, they functioned as the circuitry for the memory of a massive 1960s computer known as the UNIVAC I.

“It was like being inside a cathedral, a giant brain,” van Dam recalls. That day, he fell in love with computers.

In 1965, a year before receiving his PhD in computer science from Penn, van Dam brought that love to Brown. He was drawn, he says, by the University’s emphasis on undergraduate teaching. Because there was no computer science program at the time, van Dam was hired by Brown’s applied math department, which housed an IBM650 Data Processing System capable of making 138,000 logical decisions a minute. It was said at the time that it “produces noise and heat worthy of a small boiler factory.”

By the time van Dam arrived on campus, the widow and son of Thomas J. Watson Sr. had built a computing laboratory on campus to contain an IBM7070, the first of these computers installed on the Eastern seaboard. The IBM7070 was IBM’s first mainframe to use transistors rather than vacuum tubes. Other computing innovators, including John Savage and Peter Wegner, arrived on campus, and by 1975 they directed a program in Computer Science.

From today’s perspective, it’s difficult to imagine a Brown campus before personal computers. van Dam remembers that the IBM7070 was part of a succession of huge early IBM mainframes that served the entire campus. You fed them punch cards that contained instructions for carrying out a given program. van Dam’s research group was allowed to run their programs only a few times a day.

In the mid-1960s, van Dam saw a video about Sketchpad, a program out of MIT that let users draw and manipulate shapes on a screen with a light pen that was a precursor to the stylus. Sketchpad marked the dawn of the graphical user interface. “It must seem incredibly primitive today,” van Dam says, “but it was literally mind-blowing at the time. I said, ‘That’s what I want to do.’” He also helped develop Hypertext Editing System (HES), the first hypertext editor for a commercial computer and a forerunner of the modern word processor. HES used jumps that took you to other documents, an early version of the links that we now take for granted.

When the computer science department was officially created in 1979, van Dam was appointed chairman. By the time he stepped down in 1985, professors had their own individual workstations. The department also tested out prototypes of what became Apple’s Macintosh computer. “If you had told us back then we’d be wearing computers on our wrists, I would have said, ‘No, that’s science fiction,’” van Dam says. “I still find it kind of miraculous when a toddler who can barely walk is using an iPad.”

In 1988, the computer science department got its own building, the five-story Center for Information Technology (CIT). Van Dam played a major role in its design, insisting on atriums on certain floors and office windows you could open. True to the department’s emphasis on computer graphics and innovation, the groundbreaking involved no shovels or dirt. Instead, students created an animated tour of the new building. It showed the existing building disappearing and in its place the CIT rising one floor at a time.

One van Dam idea did not make it into the new building, however. He had been eating regularly at Little Chopsticks, a Chinese restaurant near campus, so he asked the owner if he would open an outpost in the CIT building. This was too much for the Brown administration. President Howard Swearer, van Dam says, “was from the Midwest. Food for him was for survival. He just couldn’t wrap his head around this.”

Van Dam’s greatest contribution to computer science, however, may be his influence as a teacher. “I love teaching beginners,” he says on his computer science department homepage, “whether in programming [computer science] or in graphics. Getting students hooked and often changing their lives is a source of great satisfaction.” 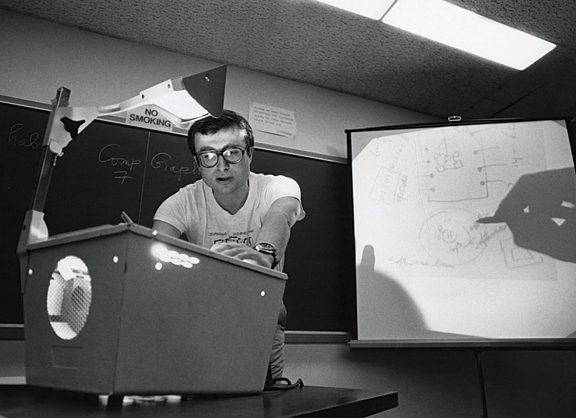 Photo: John Forasté
Former van Dam students have been sprinkled throughout Hollywood, Microsoft, and Silicon Valley, and include almost forty tenured academics at some of the best computer science departments in the world. (In May of this year, van Dam’s colleagues and former students gathered on campus to celebrate his fifty-year career at the University.) Among his most recognizable students have been Carnegie Mellon professor Randy Pausch ’82, whose “The Last Lecture: Really Achieving Your Childhood Dreams,” delivered shortly before he died of pancreatic cancer in 2008, inspired millions.

A few years ago, Microsoft researcher, social media scholar, and author danah boyd ’00 told the BAM that she sought out van Dam in his office shortly after arriving on campus. “Who the hell are you and what are you doing in my office?” he asked. boyd says, “I thought, ‘Oh, you’re yelling at me. I understand that.’ I got yelled at a lot.” Amsterdam-based computer scientist Dick Bulterman ’77 ScM,’82 PhD, who helped develop the Synchronized Multimedia Integration Language (SMIL) is a former van Dam protégé, as is Andy Hertzfeld ’75, who helped create Apple’s earliest computers.

As for van Dam’s influence on Hollywood, look no further than Toy Story, on which several former students worked. The Internet Movie Database (IMDb) notes that Andy, the imaginative boy so beloved by Woody and his fellow toys, is based on van Dam. “I can neither confirm nor deny that,” van Dam says.

In keeping with his love for teaching undergraduates, van Dam continues to teach his introduction to programming class as well as his introduction to computer graphics course. He will also pursue development of several new graphics-based projects, one of which he hopes will enable museums to create interactive, digital copies of objects too large to exhibit.

“It’s remarkable to me,” he says. “I never would have guessed I would live to see fifty years at Brown.”
What do you think?
See what other readers are saying about this article and add your voice.

Reader Responses to The Mentor