As he paddles through the surf on his board in the early hours of an August morning, Scott Anderson ’86 seems genuinely at peace—quiet, but grinning, as the waves roll past. In our small group of former and current Brown wrestling team members, he is the last to paddle back to the beach, reluctant to leave. Anderson learned to surf as a child and pursues the sport religiously. And winning an Oscar in 1996 for the digital effects on Babe has given Anderson the flexibility to pursue his passions. 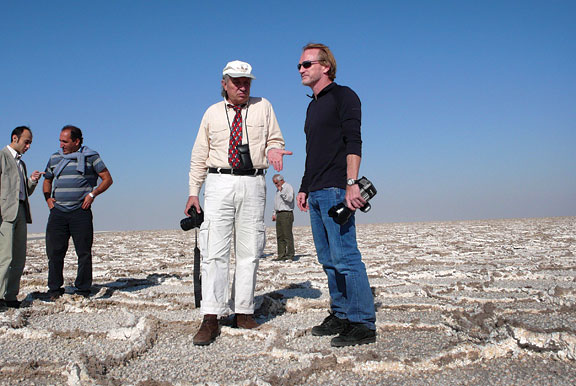 After winning the award, he says, his career became more fractured, and he began to weave back and forth between the two worlds of major studios and independents. He began his career as a computer graphics animator on the 1989 James Cameron film The Abyss, and then worked on an impressive and long list of Hollywood films, including Terminator 2: Judgment Day, Star Trek VI: The Undiscovered Country, James and the Giant Peach, Starship Troopers, and King Kong. He earned Oscar nominations in 1998 and 2001 for the special effects in Starship Troopers and Hollow Man, respectively, and also worked on Sky Captain and the World of Tomorrow and I, Robot. But it was his work as visual effects supervisor and special effects director on Babe that finally earned him an Oscar.

Along the way, Anderson also worked on lower-budget independent films, including A Midsummer Night’s Rave and Iron Jawed Angels, and he even wrote, produced, and directed the short film Cinema/Vérité, which has been described as “a love story in the twilight zone.” Splitting his time between major studios and independent cinema was a choice that Anderson made because, he says, he “started thinking about why, how I entered this business, and how to get back to that.”

Anderson attributes his need to go beyond Hollywood special effects to his time at Brown. “Not that I don’t still love blowing stuff up,” he explains. “That is still fun, but I also studied semiotics at Brown. I still have those interests, and, unsurprisingly, Marxist-feminist film theory doesn’t really play a part in blockbusters.” While working on Cinema/Vérité, he realized that using digital technology on a low-budget film is a challenge, even for him. As a result, in 2006 he created his own company, Digital Sandbox, to make cutting-edge digital technology available to both big studios and independent filmmakers.

Digital Sandbox has provided Anderson with the tools to pursue projects that interest him. So, while Anderson’s company has provided support for Bryan Singer on Superman Returns and Steven Spielberg on The Adventures of Tintin, it has also worked on such small budget films as the surfing epic Chasing Mavericks; Won’t Back Down, a story of two women who try to save a failing school; and, most recently, Muhammad: The Messenger of God, a movie released last summer by Iranian filmmaker Majid Majidi that tells the story of the seventh-century city of Mecca during the time of Muhammad.

This is why Anderson still loves working in film: “Every project, every day is different,” he says. “The puzzles and the work you do changes based on the filmmaker and the goal of the film, and no film is a guaranteed success. For one film you’re figuring out how to simulate the big wave, for the next you’re reading a new religious text for context and watching the city of Mecca spring up from the ground in South Africa, and before you know it you’ve discovered and fallen for things you never even considered twenty years ago.”

Reader Responses to Back to Basics