“When I was in high school,” he said at Brown this fall, “some people would like to soup up their cars. I was souping up computers.” By the age of nineteen, he was running Dell Computers out of his University of Texas dorm room. 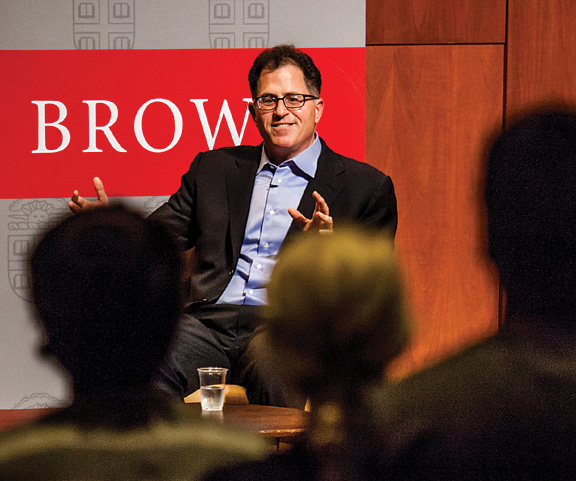 Mike Cohea
Best advice? Be fearless and curious, Michael Dell said in a lecture on the importance of entrepreneurship.

On October 9, Dell sat down at the Salomon Center’s De Ciccio Family Auditorium before a crowd of about 200—many of them budding student entrepreneurs—for a question-and-answer session moderated by Brown’s Chief Information Officer, Ravi Pendse. Entrepreneurship, Dell told the crowd, is a key element of pulling people out of poverty and blunting conflict around the world.
“If you look at where jobs come from,” he said, “70 to 90 percent come from entrepreneurs, from small or medium-sized businesses. In these conflict zones, a lot more thought could be given to how can we create jobs. If there aren’t bright opportunities for young people, then the same problems are going to repeat themselves in different forms.”

Dell Inc. now employs more than 100,000 people worldwide, and Dell himself was the youngest CEO ever to make the Fortune 500. One student asked how a young entrepreneur might achieve that kind of success.

Another key attribute in success, he argued, is curiosity: “It’s way underrated. If I had to place my bet on one thing, I’d put it on curiosity.”

Another student asked for advice on balancing a young start-up with schoolwork. Dell, who dropped out of college after his freshman year, admitted he didn’t have much advice on that topic.

“I don’t have any great tricks there,” he said with a smile, “and I could get in a lot of trouble with your parents.”

The event, sponsored by Brown Computing & Information Services, the Watson Institute, and the computer science department, was part of a lecture series on Leadership in Technology.

Reader Responses to Fear of Failing