If your visits to the local multiplex usually include viewing a loud, bombastic action thriller—light on dialogue and shallow on character but big on explosions and car crashes—then Hollywood deal maker Todd Hoffman ’89 probably isn’t your guy. 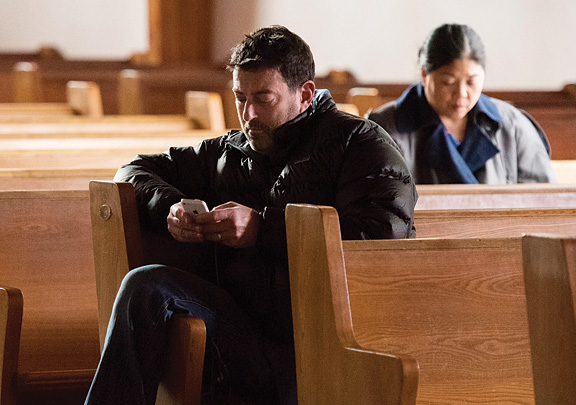 Courtesy Todd Hoffman
Todd Hoffman '89 on the set of The Confirmation.

“I love big, fun blockbusters, but those aren’t the movies that I’m attracted to put together and to make,” says Hoffman, who two years ago launched his Storied Media Group, which combines film production and management. “I really enjoy making movies about the human experience, whether they’re happy or sad or action-packed or not.

The Confirmation, the first story-driven production from Hoffman and Storied, will be distributed in theaters by Saban Films next spring. (In November, Amazon released the comedy pilot Highston, which Hoffman produced with Sacha Baron Cohen.) The movie focuses on a carpenter, played by Clive Owen, who spends a weekend searching for his lost tool box with his estranged eight-year-old son. The writer and director is Bob Nelson, who wrote Nebraska.

The Confirmation’s premiere will close a loop for Hoffman, who started in the movie business in the 1990s producing such small independent films as the 1999 romantic comedy Love Stinks, starring French Stewart, but then detoured as an agent, ultimately with the industry giant ICM, where he represented such writers as Nelson and Vince Gilligan, the creative mind behind AMC’s Breaking Bad and Better Call Saul.

Although Hoffman grew up in Washington, D.C., he felt the gravitational pull of Hollywood at a young age. “I just always loved movies,” he recalls. “For some odd reason I remember when I was in the car with my grandfather once and he said, ‘Do you know what you want to be when you grow up?’ I had seen the words ‘executive producer’ on a TV screen, so I told him I wanted to be an executive producer. I had no clue what it meant.”

At Brown, Hoffman dabbled in acting (“I was in a [Production Workshop] performance with two other actors,” he said, “and I was in my underwear for about 80 percent of the performance and it was an odd experience”) even as he concentrated in both political science and organizational behavior/management. A brief stint as a management consultant convinced the young man to go west and earn his master’s in the film production program at USC.

As an agent during the 2000s, he went from representing screenwriters to connecting traditional media brands with the film industry. His first big client was the New York Times, which he connected to the Travel Channel to bring the Times’s “36 Hours” travel articles to TV. He’s also represented 60 Minutes, the New Republic, and the Smithsonian.

Hoffman says the annual Oscars ceremony usually proves there’s still room for smaller, story-centric films. “And if you make these films responsibly at a smart price point, you can exist in Hollywood and make great films and have a wonderful career—which in large part is what I’m planning on doing,” he concludes with a hearty laugh.