The debut novel by Alexandra Kleeman ’07, You Too Can Have a Body Like Mine, begins innocuously enough. Our narrator, A, works as a proofreader and shares a suburban apartment with B, her roommate. Both girls are pale, petite, and dark-haired; “If you reduced each of us to a list of adjectives, we’d come out nearly equivalent,” A remarks. 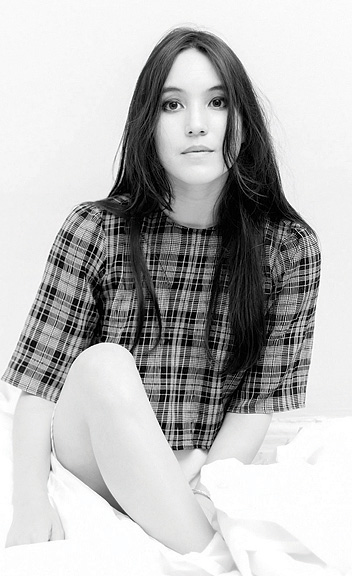 Alexandra Kleeman '07, "one of the young wise women of our generation."

A has a boyfriend, C, a blandly attractive man she describes as a “happy camper.” He is oblivious to A’s anxiety as she becomes increasingly convinced that B is trying to steal her identity. It doesn’t help that A’s sense of self is already tenuous. Most mornings she barely recognizes herself in the mirror; it’s “like waking up with a stranger,” she thinks. When C breaks off their relationship, it sends A stumbling into the arms of a wide-reaching cult suspected in missing persons cases all across the state.

What follows is a descent into the truly surreal, its strangeness amplified by Kleeman’s matter-of-fact prose. Members of the Church of the Conjoined Eater dress in white sheets and subsist solely on Kandy Kakes, a processed treat more durable even than the Twinkie. The Church’s doctrine states that all edible items are “either good for you, or they work ceaselessly to destroy you.”

The cult’s long list of prohibited foods and legions of dedicated disciples bear an uncanny resemblance to the recent popularity of the real-life Internet sensation “Food Babe” (aka Vani Hari). Despite lacking relevant education or training, Hari has built her career around alarmist claims of toxins hidden in everyday foods. In fact, reading this novel is like seeing American consumer culture reflected in a fun-house mirror—a warped, distorted image that is amusing and unsettling in equal measure. In the New York Times Book Review, novelist Valeria Luiselli wrote “You Too Can Have a Body Like Mine is a powerful allegory of our civilization’s many maladies, artfully and elegantly articulated, by one of the young wise women of our generation.”

Kleeman masterfully weaves together the issues of beauty standards, female friendship, and suburban life into a narrative that is both wildly outlandish and utterly recognizable. It’s a testament to her skill as a writer that she can evoke a neighborhood or a store so anonymous it could be anywhere, yet with such precision that you know you’ve been in that exact spot before. Readers may feel as though they are everywhere and nowhere at once—in the same way that standing in a Walmart in Massachusetts feels exactly like being inside a Walmart in Texas.

At its core, however, You Too Can Have a Body Like Mine is about the physical, the corporeal—the way it feels to exist both intimately connected to and forever estranged from the inner workings of your body. It is about a void that must be filled, with food and with something else. Ultimately, Kleeman’s brilliant first novel leaves us hungry for more.