On October 19, British scientist and UN Messenger of Peace Jane Goodall entered an ornate room in the Maddock Alumni Center to the immediate but politely quiet applause of more than twenty students. Most were members of the Brown Lecture Board, who had gathered for a pre-lecture reception. 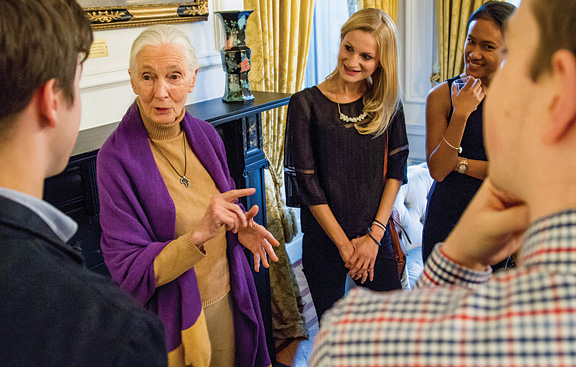 Mike Cohea
The book-signing line for Goodall was out the door, but some lucky students got a private audience.

Within minutes the students were peppering her with questions.

“Could you get the animals to respond to recordings?”

“Do you feel like because chimps are closer to us they can be a sort of link in getting us to recognize our own humanity in the sense that we’re all animals?”

“For chimps that are already in captivity, what kinds of enrichment would you recommend to make sure they are stimulated?”

“Did your parents put up any resistance to you doing research in an African forest?”

Carlie Peters ’16, an environmental studies concentrator from New Orleans, and Catherine Willett ’16, a philosophy concentrator from Sherborn, Massachusetts, were among the students who got a photo op with Goodall. The pair was representing Brown is Green to make sure the reception was zero-waste. “It was exciting because [the organizer] was really emphasizing how much the speaker wanted this to be sustainable,” Peters said. “Having her here is exciting.”

Next, the eighty-one-year-old celebrity scientist spoke to a packed house at the Salomon Center. Goodall is famous for her many discoveries, reaching back to 1960, about the sophistication of chimpanzees. In decades of observations in the Gombe forest in Tanzania, she has observed that the apes are much like us—for better and worse. They too fashion and use tools; they are social, familial, and emotional; and they sometimes wage prolonged wars.

In recent years, Goodall has become an influential advocate for environmental sustainability and the interdependence of life in the natural world. In her address, Goodall struck these themes, raising both alarm and hope. “The more I learned, the more it became obvious that there wasn’t a sharp line between us and the rest of the animal kingdom,” she said. “We are not the only beings with personalities, minds, and, above all, emotions.”

Ultimately, as severe and numerous as ecological threats may be—including climate change, deforestation, the bush meat trade, and genetically modified organisms—there is still hope, she said. Nature is resilient and the human intellect is powerful enough to pursue sustainability, instead of rapacious exploitation.

After the lecture, Goodall fielded a question that challenged her characterization of genetically modified organisms (GMO) as an ecological threat. Aren’t they simply an extension of more traditional agricultural breeding, needed to continue feeding a growing, hungry population? Not so, she responded, citing a book and other sources saying that GMO engineering involves inserting entirely novel genes into crop species. She also contested the idea that GMO crops yield more food.

During a later book signing, whose queue extended up the lower Salomon stairs, through the lobby, and far out the door, Goodall had a smile and brief words for each of her enthusiastic fans. In exchange, she heard hundreds of thank-yous.

The indefatigable Goodall has been spending as many as 300 days a year on the road pursuing her advocacy. “Unfortunately,” she said, “we’ve messed up the world students are inheriting. It’s very important to talk with students, and particularly young children, to get a different kind of mind-set so that together we can start putting the world to rights before it’s too late.”

Reader Responses to Messed Up World