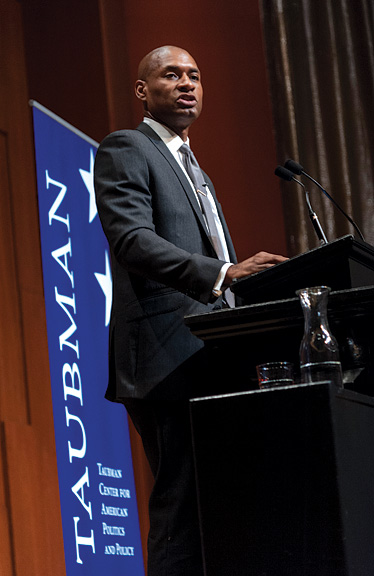 Michael Salerno
A new generation of civil rights activists has found that "fighting is the only way forward," Blow said.

Tricia Rose, director of Brown’s Center for the Study of Race and Ethnicity in America, introduced Blow, who was invited to campus by the Taubman Center for American Politics and Policy. She noted the timeliness of his lecture, in part because new students had read The New Jim Crow over the summer.

In his talk, Blow addressed the roots, breadth, and impact of what he called “a collective expression of moral outrage about systematic bias.” Referring to Rosa Parks and to the recent sixtieth anniversary of the brutal killing of Emmett Till, which is sometimes cited as the Big Bang of the civil rights movement, Blow said a new generation of activists has been “galvanized” through cases of blacks killed by police and the “overwhelming use of police force as a control mechanism.”

“The nation has been engaged in a new discussion about race,” he said. “It forces America to confront its flaws rather than wishing them away.” Blow said that the new generation of activists is realizing that “fighting is the only way forward.”

“They are stepping boldly into their moment,” he said of the new activists. “It is a profound moment to which we should gladly bear witness. And it is a moment when they need our help, but we have to meet them on their terms.”

To the packed audience, Blow spoke graphically about the death of blacks in recent police encounters. Brutality has psychically damaged African Americans far from those scenes, stealing “something precious and irreplaceable.”

During the question-and-answer session following his talk, students generally expressed support for Blow’s views. One asked how people can support a movement that so far has been without easily identifiable leaders. “Movements are long. It is a very long arc,” Blow responded, comparing Black Lives Matter to the LGBT movement that took a long time to reach its goals and required multiple generations of activists. He urged people to “remember history” and “be active in your sphere of influence.”