Covering the U.S. Supreme Court is serious business, so who would have expected an evening of laughs from a talk by National Public Radio’s Nina Totenberg? 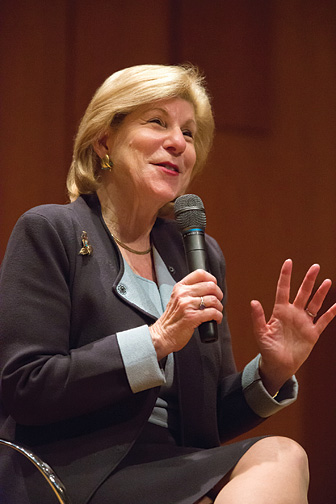 Kenneth C. Zirkel
Totenberg brought a fun storeytelling style to a very serious topic - the Supreme Court - in her on-campus lecture in October.

Delivering the Alexander Meiklejohn lecture in the De Ciccio Family Auditorium October 27, Totenberg introduced herself as a Brown reject: she was “way too stupid” to get in, she said—even though her mother, Melanie Shroder ’38, was a Brown alum who attended Pembroke College. After that opener, Totenberg continued to captivate and amuse her audience, sharing stories about the human foibles of the Supreme Court justices and talking more substantively about the court, which she started covering in 1968. Her talk was organized by the Taubman Center for American Politics and Policy.

Some issues have been constants during her more than four-and-a-half decades observing the court. Probably the most contentious of these has been civil rights. Other issues, such as obscenity, she noted, have pretty much disappeared from the docket, thanks to changing societal standards. New issues, such as gay rights and the uses and intrusions of technology, have emerged in their place. “Today’s court is more predictable,” she said, and more polarized. In this way, she added, it “reflects the country.”

Totenberg has a sharp eye for the justices’ humanity, for how they try to “squeeze the melons” like everyone else at the supermarket. With all the legalese in Supreme Court decisions, it can be easy to forget that these human beings are hardly infallible. She described how Ruth Bader Ginsburg fell asleep during a State of the Union address after drinking wine with dinner.

Today’s justices, Totenberg said, may be more religiously and ethnically diverse, but their professional backgrounds are more homogenous. In the past, Supreme Court justices often had political as well as legal experience; today they are almost all products of federal courts.

Totenberg predicted the court’s conservatives will regain their footing in the current term, which could lead to changes in affirmative action and abortion laws. She doesn’t think any justices will resign during this presidential election campaign, but with four justices more than seventy-five years old, Totenberg said, “The next president is likely to have a powerful influence on the direction of the court for decades to come.”

During the question-and-answer session following her talk, Totenberg drew many laughs. She teased one questioner, saying she didn’t accept his use of “impact” as a verb. Totenberg put another questioner on the spot by asking him for examples of insights from a book by former Justice John Paul Stevens that he liked and she didn’t.

The evening’s loudest applause came as she answered a question about the fate of a Stradivarius violin stolen from her late father, a musician. The instrument went missing for thirty-five years before turning up last summer. Totenberg said she and her two sisters decided that, rather than sell it to a collector, the violin will be sold to a musician or to a trust that could lend it to a performer worthy of this masterpiece of craft.

“It is going to be played in some great concert halls around the world again.”

Reader Responses to The Country's Reflection