Many people love to travel. A chosen few have made a career out of it. One of those is Dennis Callan ’67, who runs guided European trips through his Honolulu-based company, Tours by Train.
After graduation, Callan earned master’s degrees in anthropology and political science, with further studies in urban and regional planning at the University of Hawaii. His YouTube videos on European travel have received 15 million views, and he is the author of the multimedia e-book Rome on Foot. 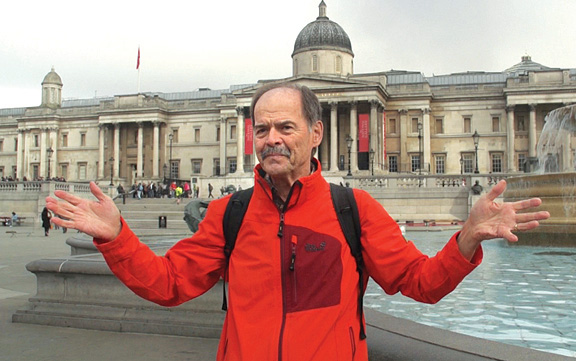 BAM Why Europe, other than its history? What is particularly compelling about European cities today?
CALLAN They have a relatively compact and dense configuration where you have walkable pedestrian neighborhoods. In European cities, most people do not live in suburbs. Americans are getting stuck in traffic more and more. In Europe, that’s not the case, because their cities are dense, and their mass transit works more efficiently.

BAM Why do your trips involve trains?
CALLAN Trains between the cities are just a great way to get around. They are efficient, clean, modern, and not terribly expensive. The station is right in the heart of town. You can ride a high-speed train 175 miles an hour to the next city in a couple of hours. On the other hand, if you want to go to little villages, then you’re going to want to rent a car.

BAM What’s the best way to find lodging?
CALLAN In smaller cities, I just use a Google map of the town. I see where the station is. [Google] has many hotels plotted right on the map. A map-based app is a good way to get a preliminary selection of hotels, and then you want to drill down and look at their reviews and pictures. In the bigger cities—London, Paris, Rome—stations are out on the edge of town, and you want to find lodging that’s more central.

BAM What are the must-sees in Europe?
CALLAN First of all, London, Paris, and Rome are a must if you have not been to Europe, for at least three days each. You could easily spend a week in each one of those. If you do stay a week, you have time for day trips outside of town.

BAM What sort of day trips?
CALLAN If you’re in London, you could hop on a train and go down to Bath or go up to York. In Paris, you can go out to the Loire Valley, or Rouen, into Normandy. You can purchase little van tours that will take you out there, or some places you can go to by train. For Rome, you could go to the Tivoli Gardens or to Ostia Antica; you can actually take the Rome metro to the seaside. Most people never go out there, but it’s almost like a Pompeii.

BAM What kind of preparation do you advise for European travel?
CALLAN Walk. That’s what I always tell my clients. One of the great joys is walking around in these places. I say walk at least half an hour a day for a couple of months before your trip. Read up a little bit on these places, establish some goals, some particular museums that you’re interested in, [and] some particular artwork. A great way to deal with the research is to save it as a web archive. Then you can just transfer that to your mobile device. Also, scan in chapters from travel books. When you’re there, the night before you’re going to visit the place, that’s when the reading really pays off. It’s not a bad idea to have your schedule planned, with the hotels booked.

BAM What about time of year?
CALLAN You really don’t want to go in the winter. It’s too cold and dark. You know, it gets dark at five o’clock. Summer is too hot and increasingly crowded. The best seasons are spring and fall: middle of April to beginning of June, and middle of September to early November. Italy is good pretty much year-round.

BAM How did Brown prepare you for being an international tour guide?
CALLAN The humanities were really important. They really, really paid off for me in my life in unexpected ways. In my English composition class, Professor [W. Nelson] Francis told me something I’ve never forgotten, which is you write the way you speak, you write in a conversational way. I’ve become a good salesman using my words. I lead groups through many museums while describing the great works, so two other important professors were [New Yorker cartoonist] Ed Koren, from whom I took a studio art course, and Vincent Tomas, teaching philosophy of art.

For more on Dennis Callan’s guided European tours and to access his travel video library, visit www.toursbytrain.com and www.tourvideos.com

Reader Responses to The Grand Tour