When you think about Brown athletes, you probably think football or hockey or rowing. But bobsled racing? Meet Evan Weinstock ’14. At the North American Cup races in Calgary last fall, Weinstock was part of the four-man bobsled team that was the top American finisher in the international competition. The team won a gold medal on November 14, five days after Weinstock and teammate Codie Bascue earned gold in the two-man bobsled. 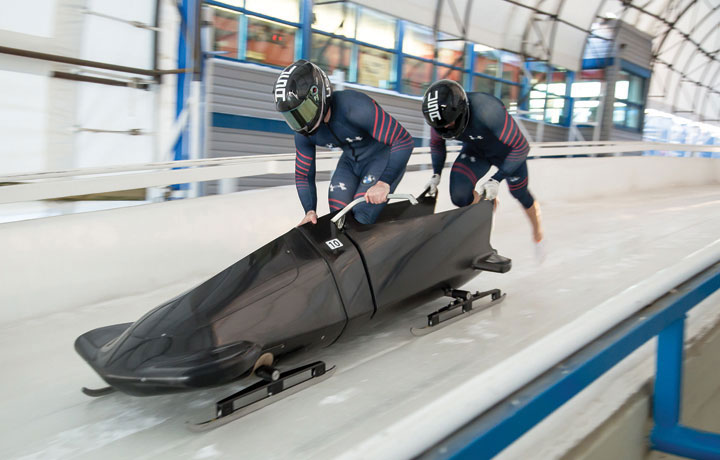 Photos by Ron LeBlanc
Brand-new bobsledder Evan Weinstock '14, right, was the brakeman on the two-person sled that won the gold medal at the North American Cup in Calgary this past November.

After the combine, Weinstock was invited to a rookie camp at Lake Placid. Then the top nine competitors from the rookie camp competed with veterans at the USA National Bobsled Push Championships in September. (Because of a lack of snow, they pushed a sled on rails.) Team trials finally took place on ice in October, and the top three sleds were named to the U.S. national team. Weinstock made the cut as a push athlete.

“I was extremely excited,” he says. “I’m grateful that they were able to see my potential.”

Between now and the 2018 Winter Olympics, Weinstock’s goal will be to gain additional experience in international competition. Every year, a new national team will be selected, and Weinstock’s hope is to be on one of the top two sleds for the games, which will be held in South Korea.

It’s a long way from growing up in Nevada to pushing a bobsled in Pyeongchang. A neighbor in Nevada was Stephen Campbell ’01, one of the University’s all-time great wide receivers, whose parents encouraged him to look at Brown. Although Weinstock, the Nevada 4A Football Player of the Year and an outstanding decathlete, had his share of college suitors, he chose Brown, where he could compete in both sports. “It had the perfect combination of competitive athletics and academics,” says Weinstock, who became a biology concentrator.

Before he could arrive at the University, however, Weinstock was forced to give up football after an injury during his senior year in high school. “I didn’t want to get surgery,” he says, “so I decided to stick with the decathlon for the first year and ended up having a really good year.” In fact, as a first-year, Weinstock won the 2011 Ivy League Heptagonal Championship in the decathlon.

That same year, Weinstock became friends with teammate and captain Craig Kinsley ’11, who was the 2010 NCAA javelin champion. It was Kinsley who first introduced Weinstock to the idea of bobsled competition after teammate Bryan Powlen ’10 received a recruitment e-mail from USA Bobsled. Kinsley and Powlen were both intrigued.

“We scoured the results at the bobsled combines,” Kinsley recalls, “and matched ourselves up, noting that Bryan was a very good candidate, maybe even a top ten performer nationally—and that I should probably stick to the javelin.” (Kinsley eventually competed in the javelin at the 2012 Olympics in London.) 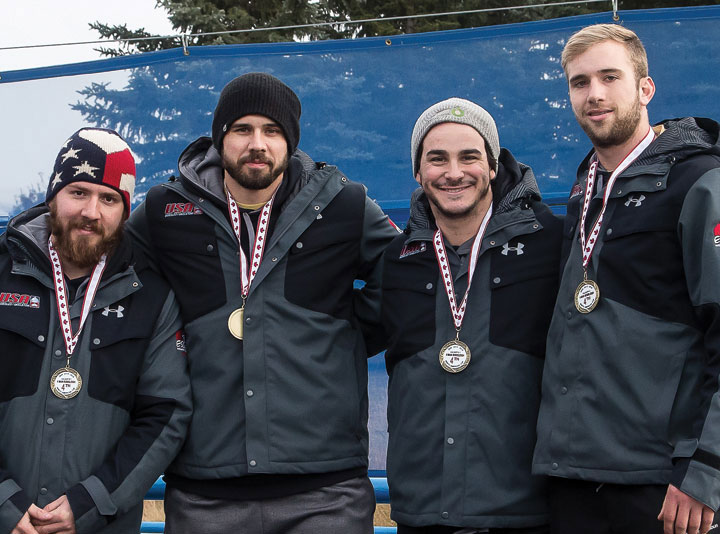 Weinstock, at right, with his four-man bobsled teammates. They competed in three races and finished first, fourth, and fifth.

But it was difficult for the three teammates to take the idea of switching sports very seriously. They joked about it, and even thought about attending a combine together, and as it turned out, the idea of qualifying took root in Weinstock’s mind. “Evan as a freshman was better than me at all of the speed- and power-testing metrics,” Kinsley says. “He was faster, could throw a sixteen-pound shot put farther than me, and could do a standing long jump farther than me. We knew with certainty that he would be a force to be reckoned with after a four-year dose of decathlon training at Brown.”

Weinstock eventually set a school record in the decathlon, and in his third year he became the Ivy League Heptagonal Champion in both the heptathlon and the decathlon. Then, as a senior, he won the decathlon at Heps for the third time and earned an NCAA All-America honorable mention.

After graduation, Weinstock moved to Stanford to continue training in the decathlon and to work as a volunteer track-and-field coach. Last June, a month before starting his bobsled career, he made the United States team that competed in the Capital Cup. Weinstock is still training for the 2016 Summer Olympic Trials in the decathlon.

With the Winter Olympics in South Korea still two years away, Weinstock is still a long shot to make one of the top two U.S. four-man sleds.

But don’t bet against him.

Reader Responses to A Big Push