As the director of New York City’s Frick Collection, Ian Wardropper ’73 likes to stop for a minute or two during each busy workday to study a different piece of art. His choices are stunning, with Degas, Goya, Renoir, Rembrandt, and van Dyke representing just a fraction of the masters on display. Yet Wardropper is most often drawn to Bellini’s St. Francis in the Desert, a fifteenth-century painting depicting the saint in spiritual ecstasy. “It’s seemingly so straightforward but it’s a very rich picture,” he says. “There’s always something new to take in.” 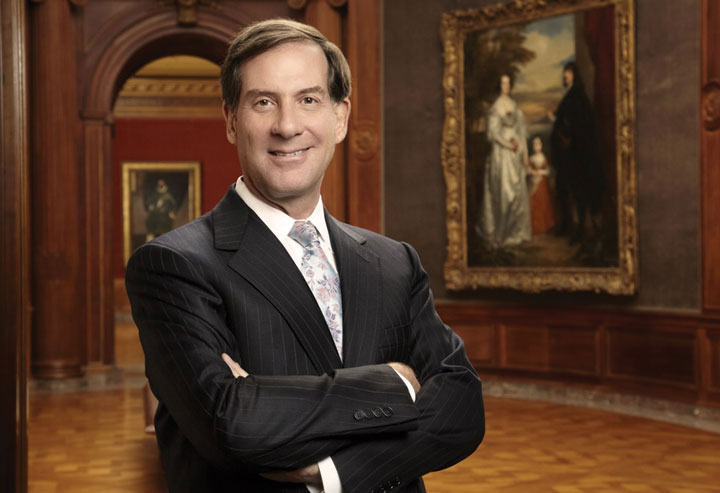 Raised in Baltimore, where his father taught Spanish literature at Johns Hopkins, Wardropper was exposed early to the arts. Every summer, his family would travel by ocean liner to visit Europe’s great museums and cathedrals. After graduating from Brown, where he concentrated in art, Wardropper received his master’s and PhD in art history from NYU. He then spent twenty years at the Art Institute of Chicago, where he installed an exhibit of Vatican artwork, the largest show in the institute’s history at the time—and met Pope John Paul II in the process.

But despite his long tenure there and a decade at the Met, Wardropper had never led a museum before his appointment to the Frick in 2011. “It was interesting for me, at age sixty, to learn a whole new profession in a way,” he says. “It’s a whole new set of challenges.”

One major difficulty has been dealing with the museum’s tight space. Attendance has steadily increased over the years, spiking in 2013, when a crowd of 235,000 came to see Vermeer’s Girl with a Pearl Earring and Fabritius’s The Goldfinch, which was the inspiration for Donna Tartt’s Pulitzer-winning novel. The show was a blockbuster, but one Wardropper wouldn’t want to repeat.

“It was just too many people,” he says. “We could barely accommodate them.” So in 2014 the museum announced an expansion plan that involved building over a private garden designed by landscape architect Russell Page. Bitter opposition developed, with major artists like Jeff Koons and Cindy Sherman expressing disapproval. The outcry was so vehement that the board abandoned the proposal last summer.

In the end, Wardropper is confident a revised plan will preserve the unique qualities of a place that serves as a haven for art lovers. “It has this sense of quiet,” he says, “and a sense of purpose that’s constantly renewing.”

Reader Responses to Directing the Frick