Through their company, Sex Discussed Here!, Solot and Miller try to undo the damage. Hundreds of colleges have hired them to get students to talk frankly about sex, from such huge public universities as Ohio State to small private colleges like the Catholic school that forbade them from using the word condom in any of their lectures. 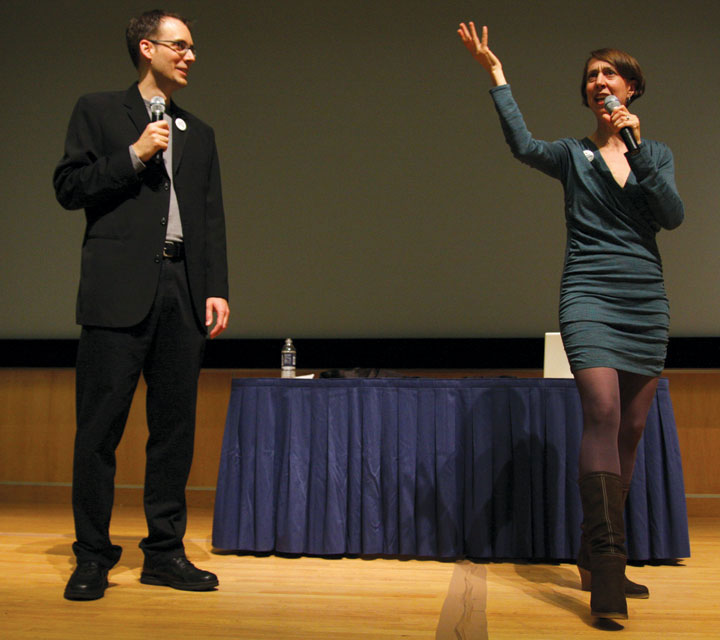 Solot and Miller try to educate teens who are starting college with a presentation on the basics of sex, consent, and communication. This is not some awkward talk from your parents. Solot and Miller speak to the students as equals. They also manage to crack jokes about sex without saying anything indecent. “Instead of bringing in stand-up comedians, they say ‘Bring in the sex educators,’” Miller says, referring to their approach of teaching through humor. A guaranteed laugh comes when they brandish a Harry Potter–themed, vibrating toy broom that Mattel quit selling because buyers found an unintended use for it.

That's not to say this is all fun and games. "Sexual assault prevention is a big part of what we do," says Miller. But to balance out the necessary descriptions of the dangers inherent to sex, Solot and Miller talk about its pleasures, too.

After graduation, Solot got a job as an adoption program director in Rhode Island while Miller worked on HIV prevention at a community health center in Boston. But on the side, they launched Sex Discussed Here! and started delivering talks on safe sex at colleges. The business got rolling through word of mouth as students at one school told friends at other universities about the presentations. It became their full-time job within five or six years. Twenty-plus years later, Solot and Miller are still together, and they’re still talking about sex.

“Our angle is not only funny, but it also boils down to this principle that pleasure is good,” Solot says. Students seem to agree: their most-requested talk is devoted to understanding the female orgasm. Solot and Miller even wrote a book on it called I Love Female Orgasm: An Extraordinary Orgasm Guide, which they say has sold more than 100,000 copies. They also offer specific talks and training on safer sex. And while their presentations are all-inclusive, some focus specifically on lesbian, gay, bisexual, transgender, and queer issues, from homophobia to dating.

Both Miller and Solot say that their comfort talking about sex goes back to the open-mindedness of their parents. “We were both raised by feminist, hippie parents,” says Solot, “who believed that access to sex information is something that people should have.”