Reader comments since the last issue:

Tears came to my eyes reading about the four class of ’55 friends who stuck to their friendship over so many years (“Same Time Next Year?” November/December). Of course it wasn’t about the football game! I only wish that I (we) had the fortitude that those guys have had to maintain so faithfully the Brown friendships that meant so much to me (and hopefully to them, too). We still connect every five years or so at reunions, and maybe another time or two at weddings (or funerals), but wouldn’t it be wonderful if we could connect as passionately as those ’55 guys did? Wouldn’t it be great? David, Richard, Steve, Rod, John, Randy, Jim, Andrea, Carolyn, Betsy, Joan, and so many others: it’s never too late! 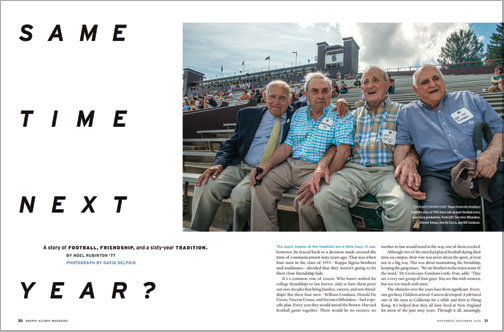 I’d like to make two points in response to the letter from John Harper ’69 PhD, which blames the Army Corps of Engineers and not the petroleum industry for destruction of the Louisiana coast and charges attorneys with “unethical” behavior in suing the industry (“Don’t Blame the Drillers,” Mail Room, November/December).

First, no one associated with the lawsuit has ever said the industry is responsible for all the damage. There are indeed multiple causes. The levees he mentions without doubt are a major contributor. From the opening press conference announcing the suit to the present, those associated with the suit have always stated that we did not expect the industry to repair all the damage. All we have ever asked is for the industry to repair the part of the problem that it caused.

That it did cause damage is beyond dispute. Mr. Harper himself states that “the industry has admitted to contributing to damage.” In fact, the Louisiana Mid-Continent Oil and Gas Association, the trade association for major oil companies, funded a study of the area where most severe land-loss has occurred and concluded “the overwhelming cause” of land-loss there was industry operations.

What Mr. Harper does not mention is that despite such studies, despite the fact that since 1980 regulations require that areas “be restored to the pre-existing condition,” the industry has refused to contribute meaningful dollars to repair the damage it caused. It has contributed millions, but its liability is in the tens of billions.

Second, Mr. Harper’s charge that the lawyers are unethical is a strange view. I was the chief architect of the lawsuit. I also was responsible for selecting the attorneys. Before ever hiring an attorney I spoke with the governor’s top aide on coastal matters about going to industry leaders to try to work out a voluntary agreement. The aide replied, “I already tried that. They’re not there yet.” That left my colleagues and me on the Southeast Louisiana Flood Protection Authority East no recourse but to sue.

I first tried to get environmental groups to take on the case pro bono, but none would. Then I hired the best attorneys I could find. They receive nothing if they lose, and taking on Exxon Mobil, Chevron, Shell, BP, and others—all at the same time—hardly guarantees success. (I might add that if the suit succeeds, I will personally receive nothing from it.) The attorneys have already spent $4 million pursuing the case, and discovery has not yet even begun. Going to trial could easily cost them in excess of $10 million. Should they win, they will collect a very, very large fee. But a vastly larger amount of money will become available to the public to protect their lives and property.

There are many more instances of peaceful resistance and movements for positive change throughout human history. There are many forms of fighting. America’s most recent race relations history and the rise of the Black Lives Matter movement are yet another cumulative example of how we continue to fail as a nation of many colors. I’m reminded of Langston Hughes’s poem “Harlem,” with its initiating question: “What happens to a dream deferred?”

Having witnessed our history of the 1960s and 1970s, I do not want us to repeat that history. Therefore, over the years, my question to myself has been: “What can I do to better understand what it’s like to be other than a white woman of a certain age in America?” At the root of my reply is to continue to honor and respect our apparent differences but to also acknowledge and embrace our shared desires, needs, and dreams, which are the more essential human imperatives.

What we as a nation continue to do to one another in the name of law and order is, clearly, splattered with the history of blood and violence, of prejudice, bigotry, and bias. Until we can (and do) walk a mile in someone else’s shoes, we will indeed keep repeating the cycle of history, because lessons learned then have been forgotten today. Indeed, Charles Blow, “remember history,” and thank you for your good words and work.