Rachel M. Harper ’94, daughter of longtime Brown poetry professor Michael Harper, spent her first years living in a Providence suburb, but, when she was seven, her family moved downtown to a loft in the city’s jewelry district: “I was raised in a non-community, amid bars and pool halls,” Harper recalls. “But I really felt like I was at the center of Providence. I had a different perspective on all the different neighborhoods around me.” 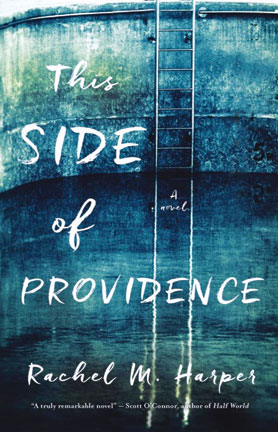 This Side of Providence, Harper’s second novel, takes its readers into a Providence very different from the one most people on College Hill usually see. This is the city of disenfranchisement, drugs, poverty, and struggle. But it is also a city of love, family values, and basic decency: “I wanted to make good sides to all my characters,” Harper says. “I saw that even in really rough circumstances people are basically good and resilient.”

Harper’s well-received first novel, Brass Ankle Blues, is a coming-of-age story that takes place largely in Minnesota, though Harper wrote it in Providence: “I don’t write about where I am at the moment,” she says. “I need distance to write about a place.”

Harper wrote This Side of Providence in Los Angeles, where she now lives, but the novel grew out of her many years of experiences around Providence: “I always wanted to be a writer,” she says, “and also wanted to have a job—I felt like I wanted to give back. After I graduated from college, as I developed my writing voice, I worked in nonprofits and lived on the south side and the west end—in all the neighborhoods that I wrote about in This Side of Providence.” Harper worked at an AIDS service education program, at the state’s only needle exchange program, and as a literacy volunteer at the Adult Correctional Institute. Her interactions with and admiration for the people she met in those jobs became the impetus for the book.

The novel tells the story of a family in which a single mother struggles with addiction and is sent into the prison system. Written in different characters’ voices, the book follows the mother, her three children, the children’s teacher, and other characters in the community, who demonstrate the challenges of living within a system without a safety net, of staying clean when one is stressed and struggling with untreated trauma, and, most poignantly, what it is like to be a child in a world without real protection from adults.

The narrative exposes both the injustices of the system and the avenues of hope found even within that system. School is primarily a benign experience, and prison, ironically, is the one place where the mother gets off drugs and processes her past.

This novel might have been titled This Side of America. There are stories like this in every American city: stories of people struggling to get by, of recent immigrants looking for a better way of life, of children growing up into a future without a clear path, of people whose potential has only a limited space—if any—to flourish.

Reader Responses to An Unlikely Hope