When Robert De Niro commissioned Remembering the Artist, a 2014 documentary about his father’s life and artistic career, he never intended for it to leave his circle of trust—that is, his family, his friends, and Megan Fox Kelly ’86 AM, the art adviser to the De Niro estate. So how did the Academy Award–winning actor find himself in April sitting on the De Ciccio Family Auditorium stage fielding questions about his father from more than 400 moon-eyed fans? 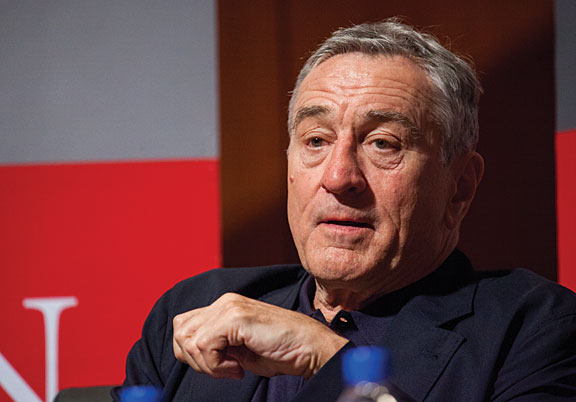 All it took, it turns out, was a little nudging from HBO. The network wanted to release it and De Niro says he couldn’t refuse. “I figured it’d make people more aware of who my father was. There’s no downside to that.”

The documentary screened as part of the weeklong Ivy Film Festival, and was followed by a panel discussion featuring De Niro, Kelly, and director Perri Peltz ’82. In making the film, Peltz and co-director Geeta Gandbhir drew on letters and journals, artists and experts, and De Niro’s own memories of his father. They portrayed Robert De Niro Sr. as a man who refused to compromise his artistic integrity—even if meant the world would never learn his name.

Of course, the world did learn that name, if not in the way the artist, whose work won him numerous gallery shows and a Guggenheim Fellowship, had originally hoped. “When he was alive and I started to get well-known,” De Niro said, “I was worried about that a little bit, about pulling the focus away. We never talked about it, really, that I can remember.”

There’s a bigger reason for De Niro Sr.’s obscurity, though. His quasi-abstract paintings—if they are discussed in critical circles at all—are often mistakenly lumped in with the abstract expressionist movement of the late 1940s and early 1950s. The truth is, although De Niro Sr. was influenced by abstract expressionism to some degree, he refused to jump on the bandwagon simply because it was popular. Remembering the Artist is De Niro’s way of setting the record straight.

“He stayed true to his own style, and he didn’t change,” De Niro said. “And so the bottom line—the reality—is that all the stuff he’s done is real. He’s not a fake. He’s a real artist. The only artist I’ve ever really cared about.”

“There’s being influenced by a style or a movement, where you can embrace that movement, or it can embrace you, or you can somehow be intertwined with it, and it’s genuine and real,” he said. “Whether you’re famous or not, it shouldn’t affect the way you make art.”