For three arduous years Luke Cunningham  ’01 wrote forty jokes a day for The Tonight Show host Jimmy Fallon. Cunningham’s favorite: “Pakistan is opening an amusement park and a zoo in the same town where the raid on Osama Bin Laden took place. The zoo is pretty cool, but I’ve heard you won’t be able to see the SEALs until it’s too late.” Cunningham says, “The classic thing about getting comedy to work like magic is when you can get that punch line to reveal something that nobody saw coming.” 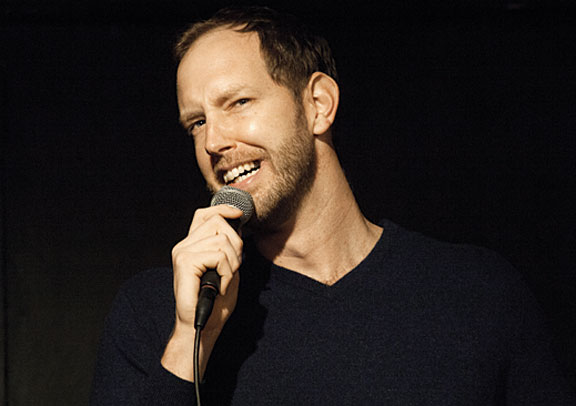 Mindy Tucker
Auditioning for a late-night show is "like The Hunger Games, but with jokes" says comedy writer Luke Cunningham '01.

Cunningham grew up overweight and tall in a working class Philadelphia neighborhood and arrived at Brown eager to row boats, study history, and make people laugh. “When I joined the rowing team, I sat down in the boat next to Austen Earl ’01 and he became my writing partner,” recalls Cunningham. “The other guy in the boat was David Walton ’01. We became roommates, and Dave later went on to do a ton of network TV shows. It was the first time in my life I felt like I could possibly pursue a career as a comedian—if I could just keep up with these guys.”

On campus, Cunningham was part of the comedy sketch group Beasts of Funny. He concentrated in American history and taught for three years at the Island School in the Bahamas. Moving to Brooklyn, he began hosting open-mic nights at New York City’s famous Comedy Cellar. “I’m six-foot-six and weigh 230 pounds, so I think one reason they had me host is because I could sort of double as a security guard on stage,” Cunningham says.

Teaming up with Earl, Cunningham cowrote Red Delicious, a prizewinning sitcom, in 2010 and moved to Los Angeles. There, he found and lost a job writing Sports Show with Norm Macdonald, then coached rowing at UCLA for a year. Comedy Central’s Night of Too Many Stars special brought him back to New York for his hyper-competitive Late Night with Jimmy Fallon audition. “It was like The Hunger Games with jokes,” he recalls. Producers initially asked thirty potential writers to submit ten jokes a day. “The next week it was down to ten writers, then five, and then they finally called me in for an interview. Needless to say, I was thrilled.”

Last November, Cunningham, by then a two-time Emmy nominee (for Night of Too Many Stars in 2013 and The Tonight Show in 2014), quit The Tonight Show when he sold Fox G Men, a sitcom inspired by his college temp job. “I’d come home over Christmas and work at the post office grabbing the heaviest boxes I could find and throwing them as far as I could into the back of the truck,” Cunningham says. “They paid me forty dollars an hour, and my job title was ‘Casual Carrier,’ which sounds like you’re nonchalant about having herpes, but I swear to God that’s the actual job title.”

This past April, Cunningham served as head writer for the MTV Movie Awards, and now he’s back in L.A. developing G Men for prime time. Any advice for comedy business hopefuls? “Find a couple of people you respect, and try to make each other laugh,” Cunningham says. “The other thing that people don’t understand is how much time goes into comedy. The best stand-ups do it for more than a decade before they get totally comfortable and conversational. If you just stick with it, you’ll get better as you go.”

Reader Responses to Lot of Laughs