This spring, as the Syrian Civil War headed into its fifth year, Brown faculty, students, and administrators reached out to try to help in ways ranging from scholarship to music. Students rallied at the Rhode Island State House in February to protest local anti-refugee efforts and raised money for groups helping Syrian refugees, including the White Helmets, a volunteer rescue group in Syria, and the Rumie Initiative, an education nonprofit founded by a Brown alumnus. Other recent developments:

FROM SCIENCE TO SOLUTIONS 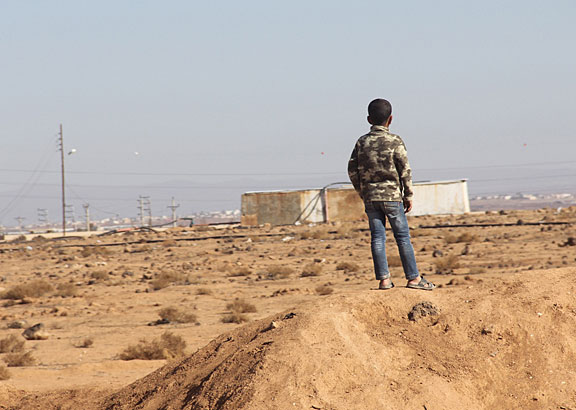 Beshara and Tala Doumani
Brown experts in neuro-science, child development, and Middle Eastern cultures are teaming up to try to help refugee children.
Brown professors Dima Amso, a brain scientist who studies how stress affects children, and Beshara Doumani, director of Middle East Studies at the Watson Institute, met up at graduation last May and started to brainstorm about how Brown scholars might be able to help refugee children from Syria.

Amso and Doumani ended up putting together a team from Brown that included neuroscience professor Carl Saab, anthropologist and Middle East expert Sarah Tobin, and Beshara Doumani’s daughter, Tala Doumani ’17, who studies international humanitarian organizations and has experience working with refugees. The team took a 10-day fact-finding trip to Jordan in January to open a dialogue with those working to provide aid to refugee children. “We kind of went in saying, ‘What are the correct questions we should be asking?’” Doumani says.

On April 8 and 9, the team produced an international conference at Brown, “Brains in Crisis: Stress and Resilience in Syrian Refugee Children,” with the goal of developing ways to better help children in Syrian refugee camps. Experts on the science of stress and development spoke alongside people from such organizations as UNICEF and Save the Children International.

The team hopes, through such interdisciplinary cross-pollination, to find a way for science and scholarship to play a meaningful role in hands-on aid to refugee children. “We can start with this refugee crisis, but if it’s well-done then it becomes a model for any crisis,” Amso said.

The Brown Jazz Band may not immediately spring to mind as a group to tap for assistance in the refugee crisis, but among other things, living in a refugee camp is boring. So, as part of the band’s spring-break trip to perform in Berlin, Michael Steinberg, Brown’s vice provost for the arts, suggested the students perform for some of the 7,000 refugees living in two hangars at Berlin’s Tempelhof Airport.

“Once it was mentioned as a possibility, the students saw it as the most important part of the trip,” said Matthew McGarrell, senior lecturer in music and the director of the Brown Jazz Band. Arranging the concert wasn’t simple. The students had to be carefully vetted. The two hangars are massive, and there was no amplification system. And no piano. The band rounded up some battery powered amps and a melodica—a portable substitute for the piano—and launched into a set, without being able to do a sound check and not having any idea how they’d be received. “I didn’t want to feel like we were trivializing the situation these refugees were in,” said Alex Han ’17, the band’s pianist.

It turned out better than they could have hoped for. “The moment the band started, all the kids started clapping along,” said Dana Gooley, an associate professor of music at Brown who was there. “A few songs in, the whole audience seemed engaged and happy. The adults that seemed skeptical and stoic before the performance were shouting for an encore.”

The concert, which took place on March 28, was set up with the help of Pamela Rosenberg, a former managing director of the Berlin Philharmonic Orchestra who has served as an external adviser for Brown’s Cogut Center for the Humanities. The social worker on duty at Tempelhof during the Brown Jazz Band’s performances told Rosenberg that she had tears in her eyes to see the refugees so happy, Rosenberg observed. “Otherwise, they are in limbo, waiting for their ‘official documents’ and to see what the next step in their lives is going to be.”

“The opportunity to play at Tempelhof was one of the most beautiful experiences I have enjoyed in 40 years of teaching,” McGarrell says.


THE CHANCE TO KEEP STUDYING

Brown has joined the Institute of International Education’s Syria Consortium, which offers Syrian scholars the chance to continue their academic work until they can safely return home. At least one such scholar has accepted an offer to come to Brown this year, according to Provost Richard Locke. Resources limit the number of refugees Brown can host, but “we remain determined to play a small role in this humanitarian crisis,” Locke says.