It was on a childhood trip to visit relatives in Kenya that Tariq Fancy ’01 had his aha moment. The Toronto native was in Nairobi, where his parents grew up, and saw a beggar squatting on the street. “I remember it exactly. He had these spindly legs and was so weak that when he tried to stand up he almost fell,” says Fancy. “My gut reaction was to reach into my pockets, but I was only seven and didn’t have any money. My uncle said, ‘Why bother? You can’t help everyone.’ I thought about that for days. It didn’t seem right that not being able to fix everything was an excuse not to do something.” 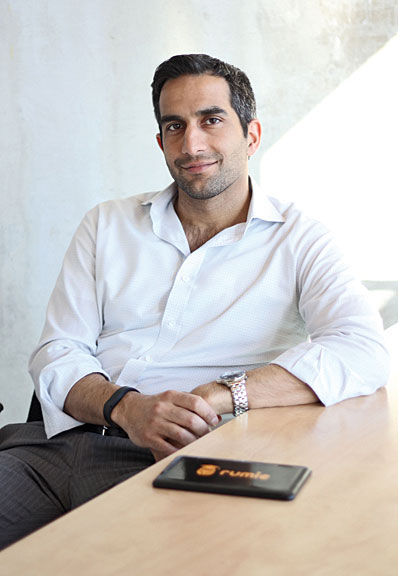 That encounter planted the seed of a passion to make a difference in the lives of the underprivileged around the globe. Fast forward 30 years, and Fancy is doing just that. He’s the founder of the Rumie Initiative, which provides tablets preloaded with educational materials—from STEM subjects to languages to vocational training—to children in developing countries without access to schools. “Each tablet has content worth well over $5,000 if it were to be reproduced in print,” Fancy says. “By making the transition from books to bytes, we’re giving these kids the same learning opportunities we have.” In other words, he’s opening the door to a vast portable library at the touch of a finger.

Since launching a pilot program in Haiti in 2013, the nonprofit has expanded to 13 countries in Africa, Asia, and the Middle East and has distributed 5,000 tablets that are now being shared by some 30,000 kids. Rumie has been quick to respond to global crises. Last year Fancy ran a campaign to help children in Liberia, where schools had been closed because of the Ebola epidemic. His latest venture, LearnSyria, seeks to ease the plight of Syrian children in refugee camps by providing tablets to kids at the makeshift Al-Salam School in Reyhanli, Turkey, located just across the border from Aleppo, Syria’s most war-torn city.

Fancy, who holds an MBA and an MA in economics and public policy, has worked as an investment banker in international development and now runs his nonprofit like a savvy businessman. He paired up with tech manufacturers to provide tablets customized with Rumie software, in bulk and at a discount. “I found open-license, open-source learning content online, then curated and uploaded it,” he says. Now that Rumie has taken off, “I leave the heavy lifting to NGOs, education ministries, and schools in our partner countries, who can select online content that’s tailored for their communities and upload it to the tablets themselves.”

His charity is also a model of financial transparency. The start-up was seed-funded with savings from his lucrative banking career, but Fancy has since been tapping into his network of high-finance contacts—corporate CEOs, hedge fund managers, and philanthropists—to cover all of Rumie’s operating costs. Every penny of public contributions goes straight into the field. At rumie.org, donors can even purchase the $75 tablets for a specific campaign so that the devices are delivered to their country of choice.

Projects are under way in Brazil, Nepal, and Moldova, but Fancy is not stopping there. LearnCloud, the closed crowdsourcing platform he created to enable partner countries to share content with each other, became public last year. “Now anyone, not just our partners, can go to our website to see what materials teachers are requesting, find quality content online, and upload it,” he says. “We want to get more people involved and raise awareness, not just money. Nonprofits are always asking people to open their wallets. But we want them to donate their time and brainpower, which is just as valuable.”

Fancy eventually hopes to deliver free content to smartphones once they become widespread in emerging nations. “That’s already happening,” he says, citing projections that the world will have 7.8 billion people and 5.9 billion smartphones by 2020. “We won’t even need to distribute tablets anymore. It will be the greatest revolution since Gutenberg.”