Only two students from the high school Jacqueline Rice attended in Columbia, South Carolina, had ever applied to Brown. Rice was the first to be accepted. The daughter of social workers, Rice became interested in Brown when an admission officer visited Charleston and talked about multidisciplinary study and Brown students’ tendency to work toward change. “Seeing that social engagement on the ground,” says Rice, now a campus activist, “that’s what brought me here.” 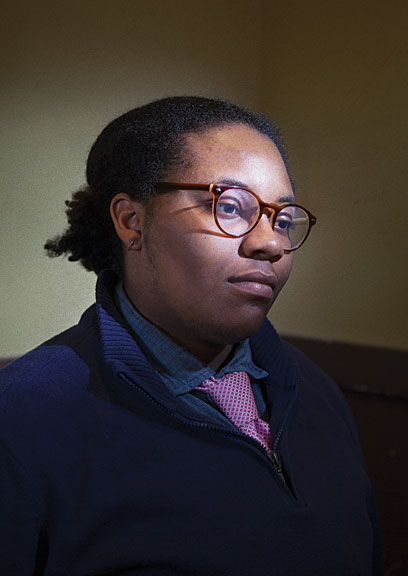 Yet Rice’s academic choices were not obvious ones for an activist. Rice’s college essay was on the process of reading a book. Rice had been studying Latin since seventh grade and, once on campus, added Greek and Italian, and chose to study classics. When it was time to declare a concentration, Rice chose comparative literature. Rice, who is African American, earned a Mellon Mays Undergraduate Fellowship, which is aimed at increasing the number of underrepresented minorities pursuing a PhD.

Rice’s senior thesis compared two epic poems, Omeros by the contemporary Caribbean playwright and poet Derek Walcott, and The Aeneid by Virgil. Rice describes being  drawn to comparative literature because it encourages such open study and is useful for understanding the appeal of stories across cultures.

Crossing cultures is important to Rice, who identifies as genderqueer and has a  quiet, calm, and even sweet disposition that belies a fiery thinker. Rice has been head of the Queer Alliance and has worked hard at Brown at helping provide a more open, safe, and inclusive environment for LGBTQ students. Rice has been part of the team in comparative literature working on a departmental diversity action plan, as required under the University’s recent Diversity and Inclusion Action Plan. Rice thinks Brown is indeed becoming a fairer and more welcoming community, though it still has a long way to go. “The university is doing better about listening,” Rice says, “though I don’t think we’ve climbed the mountain. We’re not done.” Rice also spent an undergraduate year as a minority peer counselor, believing that it is good training for a future professor.

A highlight of Rice’s Brown education was a semester last year in Dublin, one of the world’s great centers of classics study. But the time in Ireland was also marked by tragedy: Rice’s mother died. Rice had to spend all money available on an unexpected trip home and wasn’t sure that it would be conceivable to return to finish studies in Dublin until a group of Brown friends raised the funds to make it possible. Rice was amazed: “I felt really supported.”

As for the future, after going to earn a joint doctorate in comparative literature and classics at Yale, Rice hopes to enter an Episcopal seminary—a faith embraced while at Brown after growing up as a Southern Baptist (Rice is already officially a candidate with the Episcopal Diocese of Rhode Island). Ultimately, Rice wants to teach and perhaps become a chaplain, “anywhere I can be involved in creating well-rounded lives for students.”