You might not expect to find a future neuroscientist among the “meatheads” in the weight room. But Allison Brager’s favorite memories of Brown are of the long hours she spent lifting weights alongside the guys from the football and hockey teams. Brager was there training as a pole vaulter for the track-and-field team. “A lot of those dudes became my best friends,” she says. 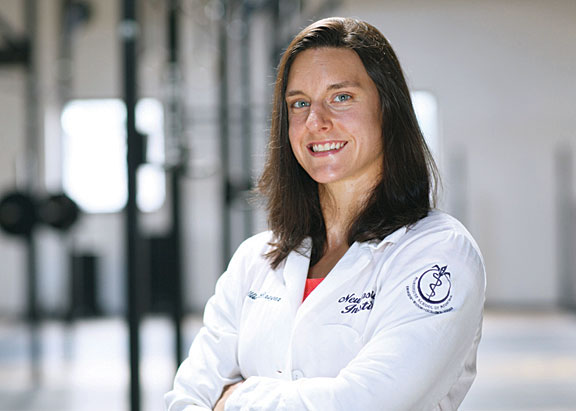 When Brager, now a neuroscience postdoc fellow and adjunct biology professor at Morehouse College in Atlanta, graduated from Brown with a psych degree, she headed off to Kent State in Ohio for graduate work. She also wanted to continue the intense, gut-burning training to which she’d grown so addicted. “I’m one of those weirdos that likes to put their body to the utmost extreme,” she says. “Nothing can replace the euphoria you feel afterward.”

A pole-vaulting friend from Brown introduced her to the high-intensity fitness program Crossfit when she visited him in San Francisco in 2009. And just in time, Brager says. “I kept getting kicked out of the gym at Kent State for doing power lifts, which they thought were unsafe,” she says, laughing. That day in San Francisco, she did Crossfit’s “Jeremy”—a grueling, five-minute sequence of overhead lifts and burpees (combo pushups and jumping jacks). “I felt crappy after, but I loved it,” she recalls.

Since then, she’s become part of a coed Crossfit team of former college athletes called the Squat Mafia, which competed in the 2013 Reebok Crossfit games, broadcast on ESPN. “Three of us ladies did really well,” she says, recalling her proudest Crossfit moment. “We worked together to get the job done, finishing complicated reps, then we joined hands and ran to the finish line together.”

Brager says she’s always been interested in the connection between high-performance athletes and the brain, but now she’s put that at the center of her research, with a special focus on sleep’s importance to top mental functioning. Last year, she published Meathead: Unraveling the Athletic Brain, which runs down research showing the link between exercise (especially the intense variety), sleep hygiene, and long-term brain power—and which posits that, precisely because training beefs up the brain, so-called “meatheads” may be smarter than they are given credit for.

“I want to debunk the myth of the dumb jock,” says Brager, who when not in the lab or training (which she does almost daily, sometimes twice) can be found in Atlanta’s parks with her dog or with friends at local food events like BaconFest. “When people think of intelligence, they think of academics, but there’s so many other realms, from social intelligence, how well you get along with others, to how well you react to environmental stress, to motor skills, to how quickly the body can move in times of danger.”

Research shows, she says, that athletes excel in these other types of intelligences because of “adaptive changes in the brain” due to intense workouts. “If you look at the top CEOs of Fortune 500 companies, it’s not a surprise that many of them were Ivy League athletes,” says Brager, who’s currently training for Crossfit regionals in Atlanta in May and hoping to make the national games again this summer. “We’re able to make decisions and take risks without consciously processing them, because the parts of our brain regulating those things have increased in surface area.”