Gage Hotaling ’35 didn’t plan to become a minister. He studied history and education at Brown, and figured he’d become a teacher or professor. But then his dad, a Baptist minister, became terminally ill. Walking around campus in the fall of 1934, angry at God, Hotaling thought he heard a voice telling him,“You are to carry on your father’s work.” So instead of getting a teaching job or doing graduate work in history, Hotaling went into the seminary. 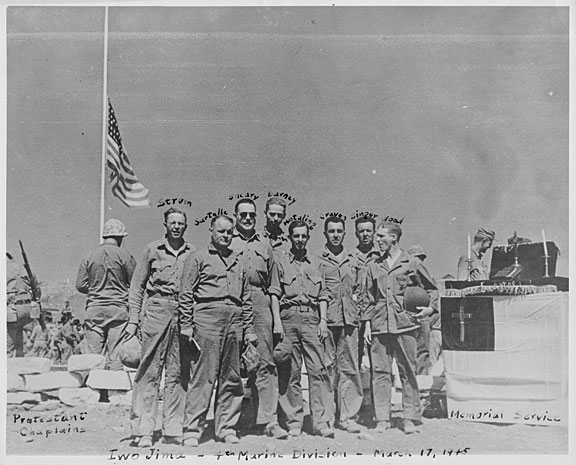 Nearly a decade later Hotaling was a young minister with a wife and infant son, attempting to help his congregation make sense of World War II. Then he heard the inner voice again. “How would he be able to preach to this generation if he could not experience what they were going through?” writes Hotaling’s son Kerry, author of a new book chronicling his father’s time as a U. S. Marine Corps chaplain in World War II. Gage Hotaling enlisted in the Navy in June 1944, was commissioned as a chaplain, and ended up in Iwo Jima, where one of the war’s bloodiest battles was fought.

Gage Hotaling died on May 16, 2010, at the age of 94. His son, a history writer, took his dad’s journals and letters and turned them into Go Forward into the Storm, which was published earlier this year. The following is an excerpt from a chapter that was left in Gage Hotaling’s own words, from a letter to his wife dated March 16, 1945.

Yesterday was a solemn day. There were at least 4,000 Marines of the 4th Division lined up around the cemetery long before the hour of dedication. They stood for many minutes in the hot sun without a sign of emotion and without saying a word to their buddies. It was as though they were in some great cathedral where every stone and every pew was sacred.

Nearly a half hour before the ceremony the general arrived, and all stood at attention as he came into the cemetery. They saw him take in the whole cemetery with a long, swift glance.

They said to themselves, “These are your men, General, your men who died for you. Yes, but these are also our buddies who died for us. We knew them back in camp. We went through P.I. with them. We saw them molded into fighting Marines at Lejeune. Then we followed them overseas and watched them climb the cliffs and storm the pillboxes and man the guns. And we saw them die as mortar after mortar crashed with that sickening, crunching sound among them. Yes, general, they are your men, but they are our men too.”

Then at last it was time for the dedication ceremony to start. It was short, far too short to pay the tribute the dead deserved. We all snapped to attention as the flag was raised above the cemetery and the national anthem was played. It stirred up all the emotions in me that had been suppressed during the strain of the last three and a half weeks, and I felt the tears trickle down my cheeks.

The cemetery looks beautiful now. Three weeks ago it looked hopeless. We were attempting to set it up on a hillside above the beach where the soil was nothing but shifting volcanic silt. It took a bulldozer nearly three days to scoop out a level trench in order that the men might be laid in there. Meanwhile, the bodies piled up outside until at one time there were nearly 400 lying within 50 yards of my foxhole. Still, life had to go on, and we ate three meals a day and we slept at night in the midst of that stench.

Eventually, we got them all buried, and then the bulldozers scooped the earth back into the trench, and the trucks brought in real dirt and packed it down on top of the volcanic sand. Then the markers were put up, the graves were mounded, a stone fence was placed around the cemetery and painted white, and a flagpole raised at one end. On this side of the cemetery is a small plot where the war dogs are buried.

One of the doctors said the other day that this has been the “healthiest” island that our men have ever fought on in the Pacific, in that no one has been sick and there have been no epidemics of any kind. But in the hospital, they have had at least one major operation to perform every hour of the day and night, as the men have been brought in with every kind of wound in the book, and some that were not in the book.

In the last week or ten days, I have read hundreds of letters written by the wives and sweethearts of the men, for they make up a large part of the personal effects which come to us. Never before have we had as many married men with children killed as we have had this time. It is one of the saddest things I know that war should do this to people, to take the heads of families and send them off to die, leaving thousands of little children to grow up without any daddies. But for the grace of God and the fact that I am a chaplain instead of a fighting man, I, too, might be lying out there right now. One wife wrote to her husband on February 22nd that steady progress was being made, another one wrote that it was reported that this battle was not as tough as Tarawa. It sort of made me wonder how long it was before the true reports started coming in to you folks back home.

Now I guess I’ll knock off for chow. It has been a wonderful hour that I have spent with you, and I send you all my love and all the kisses you can imagine. You are always my constant inspiration, and every hour of the day you’re in my thoughts. So all of my love and prayers go with this letter.


Excerpted with permission from Go Forward into the Storm by Kerry Hotaling.
What do you think?
See what other readers are saying about this article and add your voice.