When the University hired Erika Edwards as an assistant professor of biology almost a decade ago, her hiring letter left out one important responsibility. The omission, Edwards believes, was not deliberate, but it did reflect a certain indifference to what had long been a neglected research tool—one that Edwards made sure to examine during her campus hiring tour. 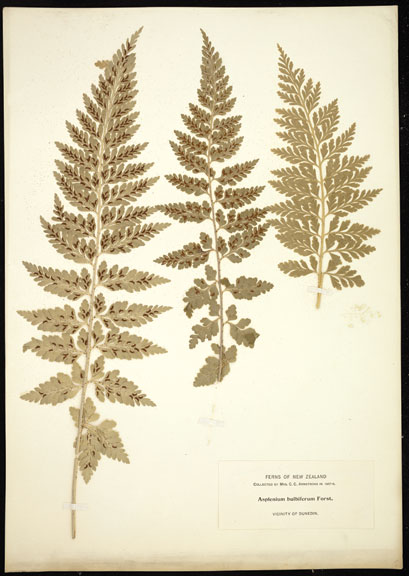 Much of what scientists know about plants begins with the painstaking collecting work of amateur naturalists and professional scientists over the past three centuries. Trudging through landscapes of all kinds, they collected samples of plants, then pressed and dried them between sheets of newspaper. In work that continues today, the collectors then arranged each plant on card stock and glued and, sometimes, taped them into position, adding a label to note the species name as well as the date it was collected and the location. The samples were then added to a meticulously organized collection known as an herbarium. Even today, many universities and institutes around the world are known for the breadth of their herbaria. Harvard’s is one of the largest.

A year after her appointment began in 2008, Edwards became director of Brown’s herbarium. Far from a well-curated collection of valuable plants from around the world, the herbarium—which Edwards’s predecessor at Brown, Annie Schmitt (now a professor at UC Davis), had once saved from being tossed into a dumpster—had long been in “temporary storage” in ancient wooden cabinets in the basement of Arnold Lab on Waterman Street. In fact, says Timothy Whitfeld, the herbarium’s collection manager, “The collection had been locked away for forty or more years.” In the Arnold basement there was no climate control; pipes had burst and flooded the basement; and mold was always an imminent threat. “It was,” Edwards says, “just a ticking time bomb.” When Edwards approached the Brown administration for help in saving the collection, she decided that, if she were unsuccessful, she would have to accept an earlier offer from the New York Botanical Gardens to give the herbarium a home.

In 2010, Edwards found an ally in Dean of Medicine and Biological Sciences Ed Wing, who used biomed funds totalling almost $700,000 to convert a medical student lounge on the second floor of the BioMed Building into a climate-controlled, state-of-the-art herbarium. The new facility was ready to receive the collection from the Arnold Lab basement in 2013, and Edwards recalls that she was planning a deliberate, carefully organized transfer—until the prediction that Hurricane Sandy was about to hit Rhode Island. Fearing another flood of the Arnold basement, Edwards, with her colleagues and students, rented a moving van and rushed to get the herbarium out of there. “We were putting the last boxes in the van just as it started raining and blowing,” she says. “It was pretty dramatic!”

Brown’s herbarium, Whitfeld says, contains about 80,000 plants—10,000 of them from Rhode Island—and now students and faculty have begun adding more. The oldest specimens were collected in the early 1800s. The collection includes specimens from around the world, including one Mexican plant that is now extinct. Edwards and Whitfeld argue that a university with Brown’s academic ambitions needs an herbarium for research and teaching. “For me as a botanist,” Edwards says, “it means the world to have an herbarium on campus. An organized collection keeps biology real. There’s something about holding a specimen in your hand—it’s important for students. They get a certain tactile experience.”

Whitfeld, who is also an assistant research professor in the department of ecology and evolutionary biology, agrees, noting that, at a time when so much research is done at the molecular level, “You’re in danger of losing the sense of what the whole organism looks like.” Herbaria, Edwards argues, are not just catalogs of biodiversity; they have become invaluable for studying a range of important scientific topics, from the evolution of photosynthesis to the distribution of species to climate change. “When did flowering plants blossom in the 1950s?” Whitfeld says. “When do they flower now? Answering those questions could give us some insight into climate change.” And the collection’s value reaches beyond biology. For example, anthropologists such as Professor of Anthropology Patricia Rubertone, who studies colonial encounters between indigenous peoples and Europeans, can examine plants that were important to tribes at that time.

Now that the herbarium has found a home, the next step is to make it accessible to as many people as possible. Thanks to a grant from the National Science Foundation, Brown for the last four years has been part of the Consortium of Northeastern Herbaria, which is made up of New England universities—including Harvard and Yale—who are digitizing their herbaria to produce a comprehensive regional collection. Almost every day undergraduates can be seen at the herbarium converting the physical plants into virtual images. So far, they have digitized more than 35,000 plants. Once the project is finished, researchers will no longer have to travel to an individual herbarium to examine a specimen. They can peruse the collections online and then borrow the relevant plants to study close up.

And it all started with a room of forgotten and overstuffed cabinets in a musty basement on Waterman Street.