Growing up in the small town of Collinsville, Illinois, Jamelle Watson-Daniels never met any scientists. Yet she was drawn to physics, maybe because her grandmother was a computer specialist. In school, Watson-Daniels found it easier to read scientific books than those on other subjects. Physics just made sense. 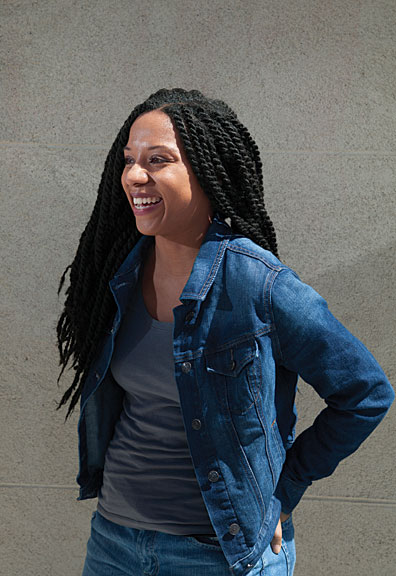 A high school honor student and cheerleading team captain, Watson-Daniels knew she wanted to go to college somewhere far away. A senior partner at the firm where her mother was a legal assistant took her to lunch one day and helped her think through the differences among East Coast universities. When she visited Ivy schools, Brown was the place where she felt most comfortable.

At a Brown pre-orientation event, she met Professor of Physics Meenakshi Narain who would become her mentor and for two years her research collaborator. During her first semester, Watson-Daniels says, other minority students, including one other black woman, were in her physics classes, but by the next semester they were gone. Surrounded mainly by white and  Asian men, she began to feel isolated as she worked on her physics concentration.

This led her to wonder why so few women of color entered physics and other scientific disciplines and what could be done about it. She met with administrators but was unhappy with their answers. “This is why I had to double concentrate in Africana Studies,” she says, “in order to develop the rhetoric and psychological tools needed to obtain my physics degree as a black woman and to build up a community of mentors and advisers who would advocate for my needs.”

After she took an Intro to Africana Studies course with Professor Corey Walker, who was then chairman of the department, he too became a mentor. “In my first meeting with Professor Walker,” Watson-Daniels says, “he pulls up this famous black physicist on his computer screen and he says, ‘This is going to be you!’”

Watson-Daniels soon focused on one question: “Why don’t we have a single full professor of physics who is black?” She rallied a group of students and started an activism initiative called Inertia: Investment in Scientists of Color. With the Undergraduate Council of Students, the group pushed for increased support for blacks in STEM fields. She served on various committees studying structural racism in the scientific community and also helped organize a Group Independent Study Program on race and gender in science.

All the while, Watson-Daniels focused on her academic studies. (She was also on the women’s varsity rugby team.) As a sophomore she proposed a research project through the Brown International Scholars Project and earned a grant to work over the summer in Hamburg, Germany, for the Deutsches Elektronen-Synchrotron (DESY), under Professor Narain. She also spent a month at CERN, the particle physics laboratory in Switzerland. The following summer she worked at Brookhaven National Laboratory on Long Island. She specializes in condensed matter physics; her senior thesis focused on “different nanoparticles that make up my materials and comparing the efficiency of these materials.”

Watson-Daniels has also been chosen as one of the two student orators at this year’s Commencement. When she graduates in May, she will not only have an AB in Africana Studies; she will be the first African American woman to graduate with a ScB in physics—or at least the first since 1960, which is as far back as the physics faculty can recall. She will also be the first person to graduate from college in her family.

But this isn’t where physics ends for Watson-Daniels. She has committed to a PhD program in Applied Physics at Harvard. First, however, she plans to spend some time back home, working for Boeing in St. Louis as an electronics design engineer.

Reader Responses to "This Is Going To Be You!"