This year’s recipients include a Nobel laureate, a social justice advocate, a doctor who’s devoted his life to treating patients in war-torn Sudan, and a neurologist trying to understand how genes, environment, and experience work together to shape us. 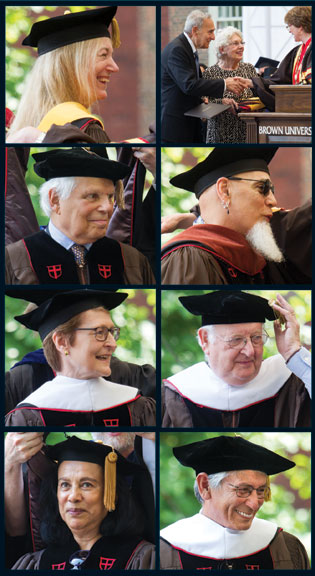 A renowned neurobiologist, Cornelia Bargmann is best known for her work to identify and understand genes that play a role in neural development and behavior. Bargmann’s research has shown how genes, environment, and experience interact to influence behavior. Bargmann is an investigator for the Howard Hughes Medical Institute and the head of Rockefeller University’s Lulu and Anthony Wang Laboratory of Neural Circuits and Behavior. She is also codirector of the Shelby White and Leon Levy Center for Mind, Brain and Behavior.

Cited as one of Time magazine’s 100 most influential people of 2015, Thomas G. Catena is the medical director and sole surgeon at Mother of Mercy Hospital in the war-torn Nuba Mountains of central Sudan, a 435-bed institution that is the only surgical hospital in an area with a population close to one million people. The hospital lies in an area where humanitarian organizations are not allowed to deliver aid. Catena helped to found the hospital in 2008 and has rarely paused in treating patients since then, managing everything from malaria to leprosy to brain surgery.

Artist and musician Umberto Crenca is the founder of AS220, an artist-run organization in Providence that is committed to providing an unjuried and uncensored forum for the arts. Since its launch in 1985 with an $800 budget, AS220 has developed a national reputation for its egalitarian, accessible approach to creative community. Each year, the nonprofit, serves more than 1,000 artists and is a destination for more than 93,000 exhibition and performance attendees. Crenca’s own works and performances have been exhibited globally.

Nobel laureate Angus Deaton is the Dwight D. Eisenhower Professor of Economics and International Affairs at Princeton, where he has taught for more than thirty years. In 2015, Deaton earned the Nobel in economics for his analysis of consumption, poverty, and welfare. In announcing Deaton’s award, the Royal Swedish Academy of Sciences noted that “to design economic policy that promotes welfare and reduces poverty, we must first understand individual consumption choices. More than anyone else, Angus Deaton has enhanced this understanding.”

Attorney Kevin Gover is the director of the Smithsonian Institution’s National Museum of the American Indian and a citizen of the Pawnee Nation of Oklahoma. In 1997, President Bill Clinton nominated Gover to serve as assistant secretary for Indian affairs in the U.S. Department of the Interior, where he won praise for his efforts to rebuild long-neglected Indian schools and expand tribal and Bureau of Indian Affairs police forces throughout the country. His four-year tenure as assistant secretary is perhaps best known for his apology to Native American people for the historical conduct of the federal Bureau of Indian Affairs.

Now the president and CEO of the California Community Foundation, Antonia Hernández is known for her four-decade career in social justice, her expertise in philanthropy, and her lifelong devotion to underserved communities in Los Angeles County and beyond. In her current role, she supports nonprofit organizations and public institutions with funds for health and human services, affordable housing, early childhood education, community arts and culture, and other areas of need. She is the mother of Ben Hernández-Stern ’03, Marisa Hernández-Stern ’05, and Michael Hernández-Stern ’09.

The George Delacorte Professor in the Humanities at Columbia University, Jean E. Howard was one of the first scholars to examine early modern drama through a feminist lens. She is interested in the political dimensions of literary works, particularly how they engage with and contest normative ideas of gender or race. The author of five books and more than fifty essays, Howard is one of the co-editors of The Norton Shakespeare, has been a Brown trustee, and has served as chair of the University’s Advisory Council on Diversity. She currently chairs the Pembroke Center Associates Council.

Charles M. Rosenthal, senior managing director and portfolio manager of First Manhattan Co., is a trustee and vice chairman of the board of the Marine Biological Laboratory in Woods Hole, Massachusetts, and a trustee of Carnegie Hall in New York City. The father of Andrea Rosenthal ’88 and Nicole Hartnett ’91, Rosenthal was a Brown trustee from 1992 through 2007 and is now a member of the Brown Corporation’s emeriti executive committee. Rosenthal has been a longtime champion of Brown’s partnership with the Marine Biological Laboratory.