There are two black-and-white photographs from the 1970s taped to my dorm room wall. Both show a group of college kids posing on the porch of an old white house, each of whom wears a different handmade newspaper hat. In one of them, the girl wearing the most elaborate construction perches on the railing. A boy, mostly hidden, peeks out mischievously from behind her while two people hang off the porch sides—one with bongo drums and the other with limbs sprawled in every direction. Another man in the photo sits crossed-legged in his origami head wear, an inscrutable expression on his face. 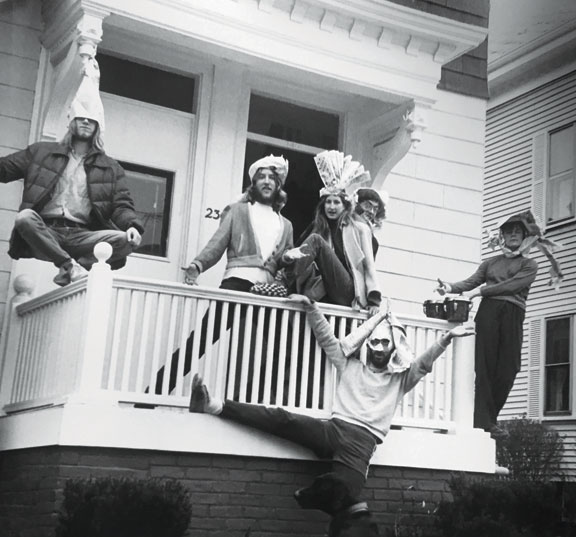 Courtesy Kate Silzer
These images strike my friends as curious until I explain that this house is on Ives Street, the kids are Brown students, and the one peeking out from behind is my dad. The photo was taken during his senior year.

I know well the adult versions of these kids. I grew up hearing their names. One of them introduced my parents to each other. Another, who still lives in Providence, I see now and then. Our family celebrates Christmas Eve every year with the girl on the railing, and the boy standing on my dad’s right is still one of his closest friends. There is a mysterious, nostalgic glow around these images of things almost familiar.

Sharing Brown with my dad is one of my favorite parts of being on campus. Certainly, some things have changed—Keeney (his freshman dorm) is decidedly nicer; semiotics (his concentration) no longer exists; and seven new presidents have been installed since he first walked through the Van Wickle Gates. But I like to imagine that the essence of this place holds true. Tennessee Williams said that “time is the longest distance between two places.” But what if there is only one place?

When the place remains constant, time’s power to separate people is diminished. There is something about the way everyone spills out onto the main green on a brilliant, sunny day that makes me forget what year it is. I become hyper-aware that my dad, too, sat on the steps outside Faunce and that he watched the sunset from the stacks in the Rock, just as I have. Walking along the College Green pathways, ducking in and out of snow-covered buildings, I half expect to run into him—his big, round glasses reflecting the icy sunlight outside Sayles.

In my mind, I watch him and his friends walk down Thayer Street, run late to classes, laugh at stupid jokes, or complain about Ratty food. What a revelation that my dad wasn’t born a fully formed adult! He, too, dealt with the trials of growing up, choosing a concentration, and struggling to maintain that notoriously elusive balance between schoolwork, sleep, and a social life.

It’s hard to picture my life beyond next week, let alone ten, twenty, or forty years from now. The closest I can come to projecting my future is looking at my dad and his companions, the people I hope to become not only because they’re successful professionals, but because they’re successful as humans, as parents, as mentors, and as friends. Because the adults they’ve become are generous, curious, and unpretentious. Because they still know how to have a good time. Several decades ago, they were standing in my shoes, and this assures me that the future, however enigmatic, is full of promise.

Crossing the Quiet Green on one of those nights when the freezing air feels like it might slice right through me and the moon cuts a defiant sliver out of the blackness, I am certain that time is not so far a distance to go.

Kate Silzer is a rising senior concentrating in English. This essay is adapted from a piece that appeared in Post-, the Brown Daily Herald’s weekly arts and culture magazine.