From the President July/August 2016

I had mixed feelings over Memorial Day weekend about seeing the Class of 2016 go. These were the first students I welcomed as a new university president. I remember their—and my— start at Brown with remarkable clarity: welcoming them to orientation on the Green on a muggy September day in 2012, and talking with them again a few days later, when rain drove us inside the Pizzitola Center for Opening Convocation. 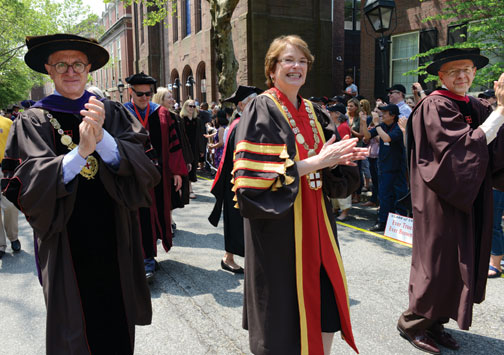 I encouraged these students to approach their time at Brown with “constructive irreverence.” I explained that universities are irreverent places full of irreverent people. We advance knowledge and understanding, and this means challenging conventional wisdom. We can’t reach new insights, invent new products, or devise great new public policies if we assume that everything we are taught, everything we see around us, is correct and can stay the way it is.

I also noted the importance of the “constructive” part of the constructive irreverence equation. Being constructive means listening to and collaborating with others. And it means taking action—not just tearing down what needs to be changed, but replacing it with something better.

The Class of 2016 and I have been through a lot over the last four years. We know that it can be really difficult to strike the right balance between irreverence and constructive engagement. This played out on our campus in discussions about fossil fuel divestment, racial injustice, sexual assault, freedom of expression, and other topics. While we didn’t always get these issues right, we all learned from one another. Time and time again, I have seen members of the Brown community step forward to pose creative, constructive solutions to problems that we face, on this campus and around the world.

While I may have tried to teach the Class of 2016 about the theory of constructive irreverence, they’ve taught me about constructive irreverence in action. I watched Brown students conduct qualitative research on the water crisis in Flint, Michigan, to ensure the voices of affected families were heard. I watched students whose inspired work led to a new center for first-generation students at Brown, and students who collaborated with legislators to draft Rhode Island’s first-ever climate change bill, which was signed into law in 2015. And there were students who turned their knowledge of biotechnology into a new, faster rape test kit.

These examples are quintessentially Brown. They are stories of determined individuals pushing forward for change in smart and savvy and collaborative ways, making full use of all they have learned on their academic journeys. They are stories of people who not only came up with good ideas, but who made them come alive.

The individual students deserve credit, of course, but so does the Brown community—the resilient and resourceful Brown ecosystem. With its opportunities for personal creativity and growth, its intellectually demanding academics, and its steady encouragement to think for yourself and to give back to others, Brown is precisely the kind of ecosystem in which constructive irreverence thrives.

Our graduates are going into a world that doesn’t always share the Brown zeitgeist. It is a place where personal insults pass for electoral politics, and where the media—social or otherwise—often create hollow echo chambers that reinforce beliefs rather than challenge ideas. But in the end, our graduates don’t leave Brown behind. They take Brown with them as they embed themselves in communities that support and inspire them. They challenge themselves to continue to learn and advance knowledge, and, always, to see where change is needed, and to act.

I hope, like so many Brown alumni before them, the Class of 2016 will be prepared to change a world that too often resists change, and too often tolerates the intolerable. I hope it will be their destiny to apply the constructive irreverence they learned at Brown to the world and all that lies beyond the Van Wickle Gates.

Adapted from Commencement remarks delivered to the graduating classes.

Reader Responses to From the President July/August 2016