Think 2016 is the most polarized election year, with the worst big-money influence? Think again, says Wendy J. Schiller, professor of political science, international and public affairs and chair of the political science department. 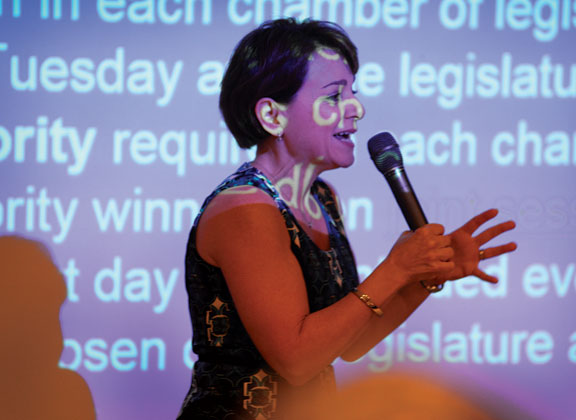 Frank Mullin
Professor Wendy Schiller showed that corruption in politics is nothing new.

In her forum, “What’s Old Is New Again: Personality, Party Conflict, and Big Money in Election 2016,” Schiller outlined the “very strong parallels” between the late 1800s and today. While our legislatures may be deadlocked, back then it was the same, only with deadly weapons. In 1896, she recounted, the governor of Kentucky had to call out the National Guard to “disarm the legislature of their guns,” she said. “Ted Cruz has nothing on the guys from the late 1800s.”

Today, there’s fighting between party elites and rich guys, she said, but back then, it was sometimes “rich guys vs. rich guys.” “The idea that we have not had polarization is not true,” Schiller said, and “the role of money in politics has always been strong.” And it’s bipartisan, she added. “The idea that money hasn’t funded both progressive politics and conservative politics is wrong.”

After giving examples from history, she addressed the current election cycle. Audience members asked her who she thought would win. Clinton might have an edge, not because of policy or personality, Schiller responded, but because of “the microdynamics of electoral politics.” For example, she said, the Democrats have a better get-out-the-vote machine.

She didn’t dismiss Trump’s chances, and ended her talk with a prediction based on our history of combative, divisive, and corrupt elections.

No matter who wins, Schiller said, “The Republic will stand.”