Over the  summer, a twenty-seven-foot nut tree suddenly appeared among the elms on the College Green. People have been stopping to stare up into its truncated branches—which holds a 5,000-pound granite river stone. Some even step over the rope protecting the newly planted sod at the tree’s base so they can get a closer look at its cast-bronze trunk. 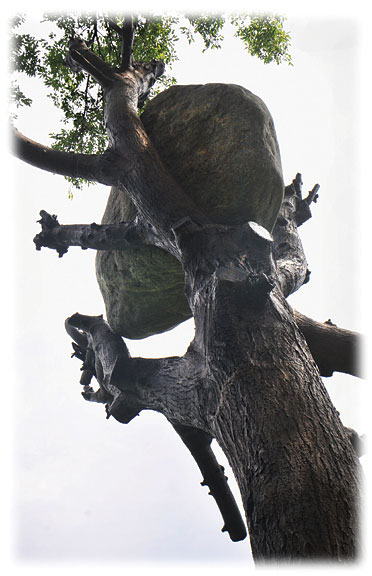 The 2006 sculpture, Idee di pietra (Ideas of Stone) by Giuseppe Penone, is the latest in a series of art installations that, thanks to the Public Art Committee, have been appearing on campus with increasing frequency. Idee di pietra is part of a series of cast-bronze trees that highlight the forces of gravity and light. The sculpture, part of the renowned dOCUMENTA (13) exhibition in Germany in 2012, was sold at auction last year for more than $1.3 million. Its current owner, a Brown alumnus who wishes to remain anonymous, has loaned it to Brown for five years.

Penone is one of the primary artists of the Italian anti-elitist Arte Povera movement of the 1960s and early 1970s, which explored the dynamic between the natural and the man-made, using common materials such as stones in order to challenge the commercialization of art.

Penone, whose tree-and-stone sculptures, he says, speak to “the need and the search for balance,” will speak on campus this fall.