The minibus driver pulled out without looking, just as my twelve-year-old passed on her bike. Two taxis, caught behind her, began call-and-response honking. She sped up, but so did the minibus driver, drag-racing my little girl on the traffic-choked streets of this dusty Colombian town. 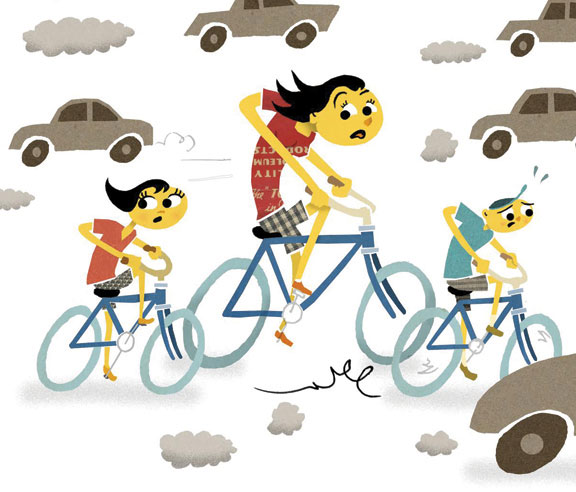 My husband and I had assumed the English-speaking bike tour would be a leisurely pedal through the calm calles of the historic district. We were mistaken. After a desultory circle around the sad little cathedral, the guide led us five kilometers across town, at rush hour, through anarchic traffic circles and stop signs that most motorists ignored. We pedaled with city buses, wildly weaving moto drivers, and entire fleets of cars whose side mirrors missed our handlebars by mere centimeters. At one point, our ten-year-old son threw his bike on the ground in tears, the only rational response to this dance with imminent death.

I have a long-standing habit of flinging myself into the unknown, focusing only on the adventure. I traveled 3,500 miles to go to Brown, my friends asking, “Is there a bridge to Rhode Island or do you have to take a boat?” After college, I signed a lease with my boyfriend, despite the youth of our relationship. As a young adult, I quit my job during a recession to backpack around the world. Now I had dragged my family to Colombia for six months just because I needed a break and wanted to learn Spanish. I leap in, imagining the best possible outcome.

Inevitably, though, the story arcs and the outcome is less rosy: my first heartbreak too far from home, my first real fight with my soon-to-be husband, a cancelled ferry in a post-apocalyptic Egyptian town, an incomprehensible ICU nurse in a grubby developing-world hospital. I shake my head at my inability to predict the downsides. Of course this was going to happen. How could I possibly have missed it?

This willful blindness to potential risks is harder now that I’m gambling not just with my own life and heart but with my children’s. What if my bet results in real harm to them? But I need my kids to understand that on the other side of these seemingly reckless decisions—in which we miss the exit ramp taken by reasonable people—lies the magic. Thanks to my freshman-year heartbreak, I made a soul connection with a friend who’d had her heart stomped on as well. When my boyfriend—Eric Karpinski ’94—and I quarreled after signing that lease, we learned the clean-fight skills that form the foundation of a twenty-two-year (so far) romance. Thanks to the cancelled ferry, I got to climb over the ruins of Palmyra at sunset. And the scary ICU and bike-tour experiences were part of what helped me raise kids who now judge what life throws at them on a scale from easy-peasy to Colombian Catholic school.

I want them to understand that a life encased in bubble wrap is no life at all and that there is power in flinging yourself in, even when it’s scary. For me, these adventures, these risks, are life: messy, and beautiful, and fundamentally uncontrollable. So I take the road more perilous.

On the bike tour, once we realized quitting was not an option, we went kamikaze, launching ourselves into traffic with a just-try-and-cut-me-off swagger. Cars slowed down. Buses eased around us. We learned the dance—and lived through it. Afterward, we celebrated our unlikely survival with empanadas and mango juice and I promised my kids that I’d never ask them to do something that reckless again. Our daughter responded: “Even if we never do this specific deadly activity again, I’m pretty sure you’ll sign us up for something else stupid and dangerous.” And I smiled because she has already figured me out.

Becca Labbe Karpinski lives in San Diego, where she works for Planned Parenthood and writes in her elusive spare moments.

Reader Responses to Flinging Yourself In