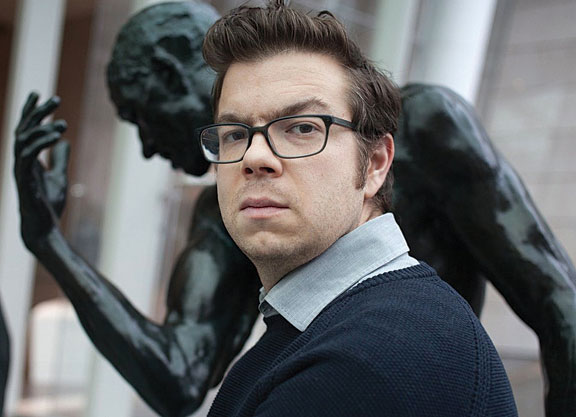 Poet Ben Lerner hates poetry, he says early in The Hatred of Poetry, yet he’s largely organized his life around it. That Lerner ’01, ’03 MFA sees this not as a contradiction but as an unavoidable element of the nature of poetry is key to his understanding of the genre and what it can and cannot do.

Poetry would be a fine concept, he argues, if it weren’t for the poems. “Poetry,” he writes, “arises from the desire to get beyond the finite and the historical—the human world of violence and difference—and to reach the transcendent or divine.… But, as soon as you move that impulse to the actual poem, the song of the infinite is compromised by the finitude of its terms.” Or, to put it more succinctly, “The poem is always a record of failure.”

The Hatred of Poetry approaches the form from an unusual—and ultimately liberating—perspective, which should come as no surprise to readers of Lerner’s earlier work. He’s best known for his highly praised and singular novels Leaving the Atocha Station and 10:04, but his intellectual curiosity moves easily among genres. In addition to writing three well-received books of poems, he is a MacArthur Fellow as well as a Distinguished Professor of English at Brooklyn College, and this year he became the poetry editor at Harper’s.

In this slim book, Lerner ranges widely, from Caedmon, the first known poet in English, through Plato, Keats, Dickinson, Whitman, and Claudia Rankine, among others, to assess how each has helped shape our expectations of poetry and how those expectations, along with the wider culture, have in turn shaped the work of poets. (He is not afraid to look at terrible poets as well, including the nineteenth-century Scottish poet William Topaz McGonagall, who was first introduced to Lerner at Brown by literary arts professors Keith and Rosmarie Waldrop.)

Lerner takes on the complaint of contemporary critics that poems have become so inward-looking that the universalizing magic of Poetry—with that idealized upper-case P— has been lost in a dim haze of narcissism. Why not produce poems like Whitman’s, for example, who is easily simplified into the poet of the great bear hug, pulling in all of America.

The truth is, Lerner argues, that whatever universality poetry has expressed in the past is the universality of the white male. “The haters,” he writes, “should stop pretending any poem ever successfully spoke for everyone.” This is not to imply that the great poems of the past can be read, appreciated, and loved only by white males. But some of the most interesting—and, yes, outward-looking—poems written today are by such poets as Claudia Rankine, who challenges the traditions of the form in order to use her own experiences as a black woman to reveal larger political and racial truths.

The key to approaching poetry as a reader, Lerner believes, is to meet it with the kind of openness he felt as a child inside a dark movie theater waiting for the images to light the room from the screen. As a poet, Lerner writes, “I live in the space between what I am moved to do and what I can do.”