Eyeland by the Low Anthem, founded by Jeff Prystowsky ’06 and Ben Knox Miller ’06 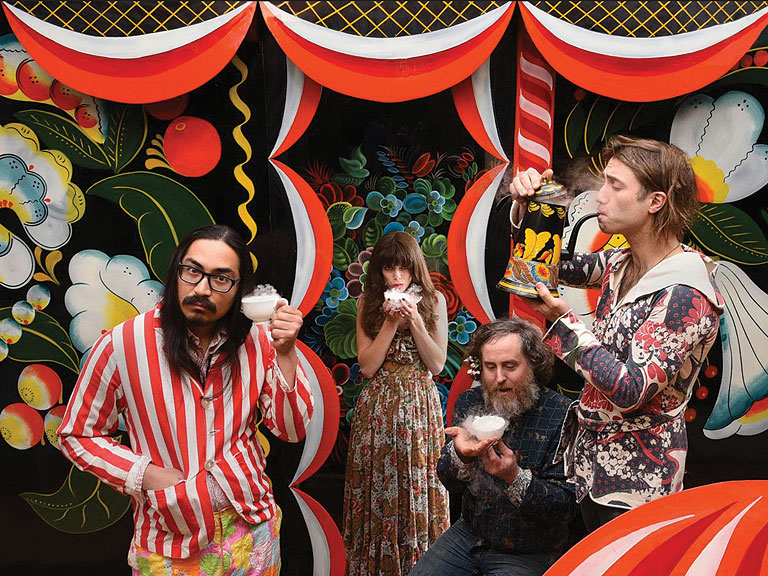 The relationship between rock promoters and bands can be contentious. The late Bill Graham, to cite one famous example, had some legendary battles with the artists he presented. But the members of the Low Anthem have solved that problem at Providence’s Columbus Theatre: they book the place themselves.

Formed at Brown by multi-instrumentalists Ben Knox Miller ’06 and Jeff Prystowsky ’06, the Low Anthem recorded a self-released debut in 2006 and followed it with three critically hailed albums: What the Crow Brings (2007), Oh My God, Charlie Darwin (2008), and Smart Flesh (2009). Band members have come and gone, but the founders have persisted—and their latest effort, Eyeland, recorded at the Columbus Theatre, was released earlier this year.

It was Prystowsky’s need for lunch one day that led to the band’s unusual identity as promoters as well as performers. “Jeff was in a pizza shop across the street from the Columbus,” Miller explains. “He was sitting there eating and looking at the building. It said ‘Opening Soon’ on the marquee—it had said that for five or six years. He was just curious. What’s up with this place?”

Those shows began in 2012 and have been going ever since. Distracted by their new responsibilities, the musicians delayed their own musical work, which explains the time gap between Smart Flesh and Eyeland. Described as a “psych-noir drama,” the new album is ambitious and highly unconventional. It was influenced by advice the band received from famed producer Daniel Lanois—who told them to listen to everything they’d recorded backwards—as well as by Prystowsky’s visit to San Francisco’s Audium, a “theater of sound-sculptured space,” where listeners are enveloped by sounds coming from dozens of speakers arrayed all around them.

Inspired by these new ways to hear their music, the band members found themselves deconstructing and reassembling their material. “Songs based on live performances became studio productions with sound sample collages built over them,” Miller says. “And then, in another phase of this kaleidoscopic mastering process, we were cutting up the songs and interweaving them into one another.” The result is a fascinating and sometimes confounding sonic assemblage that rewards repeated listening.

With Eyeland completed, the Low Anthem is now figuring out how to perform the material live. The touring group consists of the founders plus two other versatile musicians, Bryan Minto and Florence Wallis. Reproducing the exact sound of the album would be impossible, and Miller says there’s no point in trying to do that: “Our leaning is toward the spirit of the song—the same mentality of discovery and chance operation that produced the mixes. The live thing is a whole other thing, and it’s gone the minute it’s played. It disappears into the past.”