For attorney Kimani Paul-Emile ’93, ensuring social justice and racial equality in the United States won’t be accomplished with any single tactic. “Just suing isn’t going to get you there,” she says. “It requires a broader approach.” 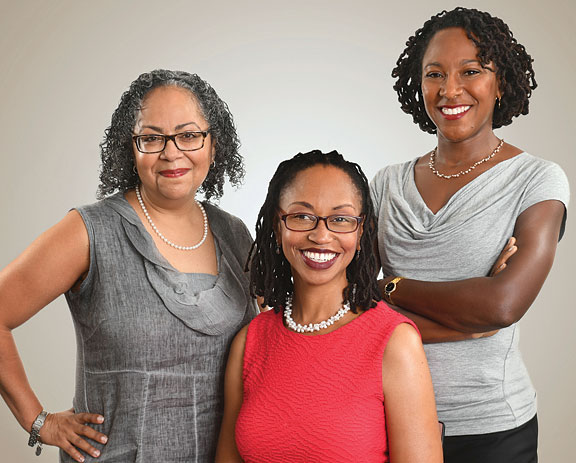 That approach is exemplified in the new Center on Race, Law and Justice at Fordham University. Created by a trio of Brown alumnae, all of whom teach at Fordham’s law school, the center is examining domestic and global issues of race, law, and equity, which are expected to help identify, analyze, and create new solutions to the key civil rights challenges.

“The country is in a unique moment in the sense that we’re in the midst of a national conversation about race and equality unlike anything in a generation,” says Paul-Emile, who is leading the center’s domestic programs and initiatives. “Law, as it did in the civil rights struggles of the 1950s and 1960s, will play a central role in addressing the racial disparities and inequality that threaten our democracy and system of justice in the twenty-firstt century.”

The center, which opened in February, was conceived by Robin Lenhardt ’89, who was a member of the litigation team that defended the University of Michigan in the affirmative action lawsuits Gratz v. Bollinger and Grutter v. Bollinger, the latter of which upheld the affirmative action admissions policy of the university’s law school. The center  serves as an incubator and platform for cutting-edge interdisciplinary scholarship on race, structural inequality, and racial justice, according to Lenhardt. The goal: helping to effect real, positive change.

The Fordham center will also offer speaker series and workshops to promote conversations about race and inequality as they pertain to access, opportunity, and equality. “The need for this particular lens and intervention has only become more important,” Lenhardt says, referring to the latest killings of blacks and police. “The focus is to have a fully active academic center whose priority is generating and supporting scholarly research in developing and encouraging innovative approaches to thinking about these issues. The focus is academic,” she adds, “but there’s also a lot that needs to be done in legal education to better prepare students to think about issues of race and systemic solutions.”

Leading the center’s global and comparative law programs and initiatives is Tanya Hernández ’86, who says these efforts address “a real thirst on the part of our students and community to have engagement on the issues of race and social justice.” Advocacy has been fueled in large part by the Black Lives Matter movement. “It’s one thing for the students to speak their truth to power, but it’s another to have a skill set for being able to engage,” Hernández says. “It’s not work that can be done simply by having good conversations. It’s work that needs rigorous intellectual engagement across the disciplines, and that’s what we’re hoping to see fostered at the center.”

All the center’s founders say their efforts are influenced in no small part by their time in Providence. Lenhardt (an English major) and Paul-Emile (a double major in political science and American studies) credit Anani Dzidzienyo, associate professor of Africana Studies and Portuguese and Brazilian Studies, with nurturing their sensibilities about race and justice. “My identity as a person committed to civil rights was formed and fostered at Brown,” adds Hernández, who majored in sociology. “I can’t imagine being the person I am today without the experiences I had at Brown University.”