She’s a real clown, but Sarah Petersiel ’02 wears a low-key costume. Floppy, oversized shoes never cover her feet, and her face sports only bright lipstick and eye shadow to match her clothing. There’s no reason to cake it on like a circus clown, because Petersiel doesn’t need to be seen from the last row. She’s just inches away from her audience as she works to cheer up sick kids in hospitals in New York, New Jersey, and Connecticut through the Big Apple Circus’s Clown Care program. And she definitely doesn’t want to scare them. “We want the makeup to be a clear invitation to play, but we also want it to be very human,” she says. 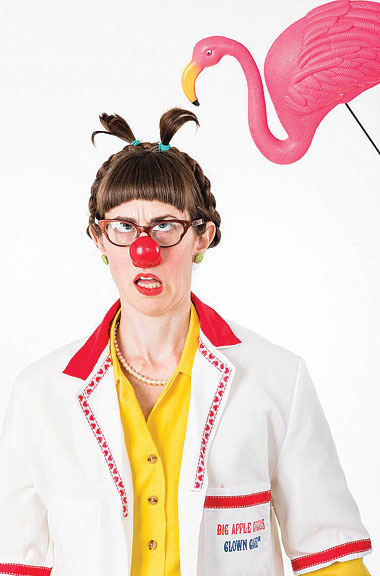 When Petersiel makes rounds through the hospital, she wears a white lab coat whose pockets are stuffed with juggling props. With another clown, she drops in at the pediatric ward and other units that might have young patients, some afflicted with grave diseases. Physical comedy is a big part of the clowns’ shtick as they stumble, slip, and flop through routines with such silly premises as one clown rejecting the other’s romantic interest.

“There’s a power in us playing dumb. We aim to empower the patient,” says Petersiel, who’s been with Clown Care since 2007. Petersiel is the unofficial chief resident of the circus’s Clown Care unit. As a veteran of the program, she teaches up-and-coming clowns how to use laughter as medicine and even trains some doctors and nurses on their bedside manner.

Getting a smile or a laugh from children aged 4 to 10 couldn’t be easier, Petersiel says. Toddlers, on the other hand, can get scared easily by a stranger. The toughest crowds are adolescents and teenagers. Petersiel counts on her juggling, magic tricks, and even a little freestyle rapping to win them over. “There’s sometimes a hurdle to get past,” she says, “but we’re not going to use the same material as we would with a 5-year-old.”

You don’t need a medical condition to see Petersiel perform. Her juggling and magic tricks are on display before the Big Apple Circus’s tent show—she’s one of the entertainers who interact with audience members as they settle into their seats. But she particularly enjoys her work in hospitals, she says, “bringing an interactive performance to a population that couldn’t come to us.”

There are basically two types of clowns, according to Petersiel. Some are from a circus background, and others, like her, started in the theater world of physical comedy. Petersiel is co–artistic director of a small bicoastal comedy ensemble called Under the Table. A recent tour of their adaptation of Victor Hugo’s The Hunchback of Notre Dame received positive press coverage. The group taps into Petersiel’s expertise by offering workshops in clowning and physical comedy.

Petersiel says her life is divided into thirds, with Clown Care and Under the Table making up the first two pieces. The last comes from her work at the New Victory Theater, a New York City–based theater for kids, where she’s a teaching artist. “Theater for everyone” is their motto. At times, that has sent her into New York City schools to show students puppetry, and on another occasion she was sent to Korea to train art teachers.

“My life pretty tightly revolves around performing and teaching,” Petersiel says. “I like the arts to be accessible to all people, whether they’re wealthy or working-class or healthy or sick.”