Jamaal Stephenson ’97, the director of college scouting for the Minnesota Vikings, is stuck behind a desk these days. And he’s glad about it. 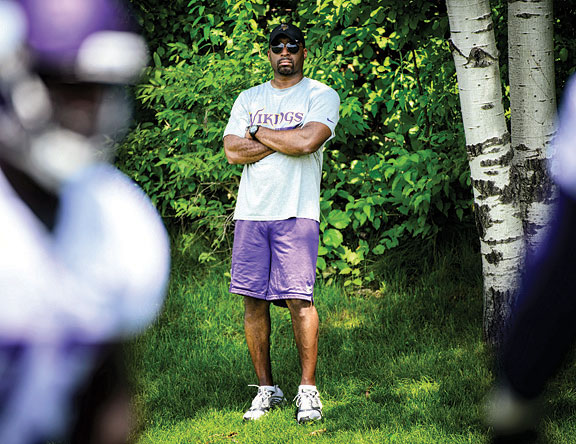 “People think scouting is a glamorous and glorious life. It’s not,” Stephenson says with a laugh. “You’re in and out of airports, in and out of hotels—it’s a pain in the butt. And it can get very lonely sometimes,” he adds.

“But it was also exciting to know I was a part of the franchise, and I was helping the team get better,” Stephenson says. “Luckily, my wife, Emily Caplan ’97, has been very supportive of my career.” Caplan is a lawyer for the U.S. Department of Homeland Security. “Sure, there were certain events I couldn’t avoid missing,” Stephenson says, but jokes, “We planned our family well so I wouldn’t miss special occasions. My wife and son’s birthdays are in July, and my daughter’s birthday is in May”—when college teams are on summer break. And these days Stephenson heads a department of eight college scouts who visit campuses for him, allowing him to stay closer to home turf.

Growing up in Goldsboro, North Carolina, “on Tobacco Road,” Stephenson jokes, he played basketball and football in junior high school. A football scholarship took him to Brown, where he earned All-Ivy honors playing for the Bears under former head coach Mark Whipple. After graduation, he followed Whipple to UMass, where he worked as a graduate coaching assistant while earning his master’s in sports management in 2000.

Internships with the Washington Redskins and Houston Texans led to a job offer in the Vikings’ scouting department in 2002, and over the next decade he logged thousands of air miles, accumulated hundreds of Holiday Inn points, and shook dozens of college coaches’ hands looking for potential punters, passers, and tacklers. He gained a reputation for having a good eye for talent and in 2012 won the National Football Conference Scout of the Year Award. He was promoted to his current position two years later.

When he’s studying a collegiate athlete with NFL aspirations, Stephenson says he asks himself two questions. “First, is he athletic enough to play in the NFL? And second, how much does he love to be around the football field? Then I rely a lot on what sources say about him—you really don’t know about a guy until you’ve talked to his coach.”

He pauses a moment, then adds, “It’s a tough job, and you can’t always be right about someone, because sometimes it’s hard to know what’s in a guy’s heart. But if you do your homework, you’ll find the right guy for your team.”
What do you think?
See what other readers are saying about this article and add your voice.