Talking Past Each Other

Is the Affordable Care Act “comprehensive health reform,” or is it a “Washington takeover of health care”? In contemporary U.S. politics, the words you use are likely to signal what political party you favor, according to a new working paper coauthored by economics professor Jesse Shapiro. 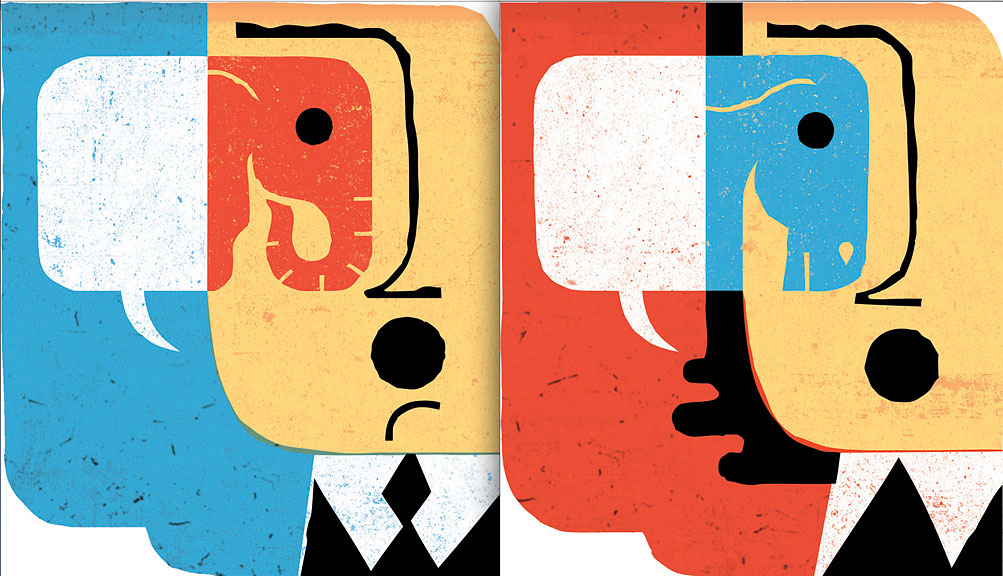 “We are seeing evidence that, increasingly, Democrats and Republicans in Congress are speaking different languages,” Shapiro says. Republicans often use the term “illegal aliens,” for example, for the same people the Democrats speak of as “undocumented workers.” Similarly, the killing of forty-nine people at an Orlando, Florida, nightclub in June was an act of “radical Islamic terrorism” to many Republicans; Democrats tended to call it a “mass shooting.”

Have these differences in political speech always been there? Shapiro and coauthors Matthew Gentzkow of Stanford and Matt Taddy of the University of Chicago developed an algorithm that searched for unique two-word phrases (such as “estate tax” or “death tax”) and then used it to analyze transcripts of speeches from the Congressional Record between 1873 and 2009, a 136-year period. The results show a sharp recent trend toward increasingly divided speech.

“Partisanship was low and roughly constant from 1873 to the early 1990s,” the authors write, “then increased dramatically in subsequent years.”

For the period from 1873 to 1990, the algorithm had a 54 to 55 percent chance of correctly guessing a speaker’s party based on one minute of speech. But in 1994, around the time of the “Contract with America”—the document that outlined legislation Republicans wanted to enact within the first 100 days of the 104th Congress—that changed dramatically, thanks to what was then the relatively new practice of using consultants and focus groups, the authors say.

Through focus groups, the consultants find out what kinds of language are most effective and then craft political talking points accordingly. The increase in media coverage of Congress—such as the live broadcasts of Congressional sessions on C-SPAN—fueled the use of these practices. By 2009, the probability of guessing a speaker’s political party based on a one-minute speech had climbed to 83 percent.

The widespread use of talking points, as well as of consultants, focus groups, and polls, is likely contributing to deeper divisions, the authors conclude, noting that the establishment of a common language has been shown to be a key factor in the creation of a common identity: “That the two political camps in the United States increasingly speak different languages may contribute to the striking increase in inter-party hostility evident in recent years.”

Reader Responses to Talking Past Each Other