In a ceremony September 16 at Sayles Hall, three Brown students from the class of 2020 became the first students since 1969 to serve their country through Naval and Air Force ROTC programs. The training still will not occur on campus, however. Brown Navy and Marine Corps midshipmen will join the Naval ROTC unit at the College of the Holy Cross in Worcester, Massachusetts, and Air Force ROTC cadets will join Detachment 340 at Worcester Polytechnic Institute. 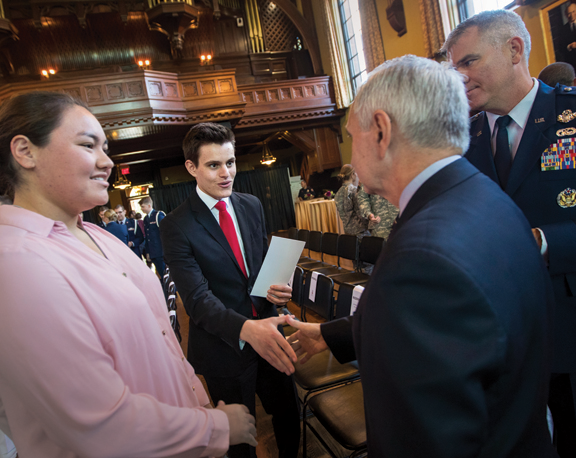 Credit: Nick Dentamaro
The first three students in the program, Ben Chiacchia ’20 (Navy), Luc Langlois ’20 (Air Force), and Melia Okura ’20 (Air Force), were all inspired by relatives in the armed forces, and aim to become leaders in public service, the law, and cybersecurity, respectively.

Okura, from Hanapepe, Hawaii, said that at one point in high school she almost applied to the U.S. Air Force Academy but decided on Brown instead because of its computer science programs and the appeal of the open curriculum.

“What I like about doing the ROTC program as opposed to the [Air Force] Academy,” she says, “is that I can enjoy the awesome experience of going to Brown University while at the same time getting a very solid start to a military career. Cybersecurity is an increasingly relevant problem in the world today, especially when it comes to national security. Thus, joining the Air Force to help protect our country from cyber attacks seemed like an awesome career to have.”