From the President November/December 2016

During Family Weekend, I was privileged to share with visiting families a perspective on the dazzling and inspiring Brown I have come to know over the last four years. Why is Brown so special? I suggest that it starts with understanding two moments in history that shaped the University’s character. 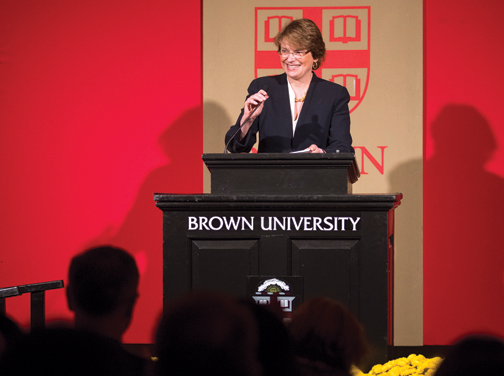 When Roger Williams was banished to Rhode Island in 1635 for supporting the rights of Indians and religious dissenters, Rhode Island’s reputation was cast as a sanctuary for people who were brave enough to think for themselves and stand up for what they believed. Brown soon rose, a haven for forward-looking, open-minded thinkers from diverse backgrounds, charting its own unique pathway to learning.

And when Henry Wriston, Brown’s tenth president, wrote the pamphlet “The University College,” a vital piece of Brown’s identity was given voice. The university-college married the rigor of traditional liberal arts education with the resources of a major teaching and research university. This idea became Brown’s calling card and drew in independent-minded students.

Within these formative moments lie the seeds of the “Brown difference,” which is driven by three virtues.

The first is our student-centered learning environment. Learning, after all, should be a daring adventure, not a forced march. Brown’s unusually self-motivated students accept responsibility for their intellectual direction, taking risks and forging unique academic connections, between music and engineering, say, or economics and robotics. Students do not come to Brown to be taught. They come to learn. They study what they love and are empowered to shape their education. This kind of learning imparts an intellectual flexibility that is coveted in the world today.

The second virtue is the collaboration that takes place across people and fields of study. Enabled partly by Brown’s size, scale, openness, and diversity, it is what enables undergraduates to be full partners with graduate students and faculty in research, teaching, and mentoring. This is the university-college idea—that Brown is a liberal arts college integrated into a major research university. It means opportunities abound—in internships sponsored by alumni and parents through our BrownConnect platform, in our Undergraduate Teaching and Research Award program, and in our many academic hubs and centers. And it means recognizing the imperative of collaborating with people from diverse backgrounds and life experiences, who look at ideas from different perspectives—a quality that makes us stronger and sharpens the academic excellence we seek.

The third virtue is the desire of Brown students to have impact in the world, at a time that demands leadership. Brown cultivates this inclination, from promoting Engaged Scholars, to encouraging students who serve in the local schools and communities around Providence, to supporting constructive activism on issues that affect campus life.

This is what it is like at Brown, all the time. We treasure this aspirational quality in our students, this willingness to take on challenges, locally and globally.

When Brown Professor Michael Kosterlitz was awarded the 2016 Nobel Prize for Physics in October, there was jubilation on College Hill for his historic achievement. Though we may not all have understood the details of his research, we understood that he had literally expanded the boundaries of knowledge. This squares with a Brown that opens possibilities. Maybe a first-year will pick up a strand of this research in the years ahead and will wrestle with it; build an interdisciplinary team of engineers, scientists, and entrepreneurs; and pioneer a new highly conductive material that powers the quantum computing of the future.

That is the Brown difference—where open academic inquiry meets unlimited opportunity, and where intellectual motivation, a collaborative spirit, and a desire to impact the world all come together in a daring adventure.

Adapted from “Family Weekend Welcome,” which you can read in its entirety at the Office of the President website at brown.edu.

Reader Responses to From the President November/December 2016