I was going through security at the airport. “Stop in front of that gate, sir,” I was told. To my right, an agent waved my lover into the body-scanning machine, where she paused, then stepped out, but I did not. I never do. “Okay, this way, sir,” another agent said, opening the gate. “Wait right there, and we’ll send someone over to do the check.” 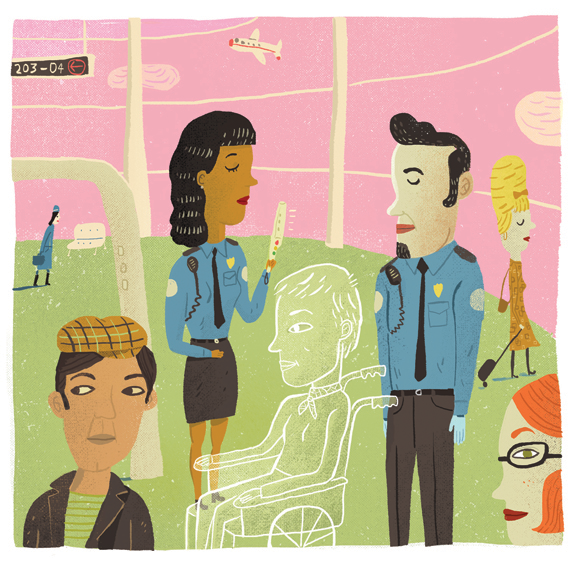 The man who showed up swabbed my wheelchair for bomb-making residue and waved me on. “He’s ready to go,” he said, turning me over to Janet, because we were so clearly a couple. I wonder what he would have made of my breasts, had he been more thorough. I waited for one of the agents to look at me, but none of them did.

Thirteen years ago, in 2003, I was on my regular seventeen-mile bicycle ride when a branch got tangled with the spokes of my front wheel, throwing me to the pavement. My chin took the full force of the blow, and with a broken neck I was instantly paralyzed. I have suffered many losses as a result of that irreparable, irreversible injury, from the trivial to the profound, injuries of both body and mind. Among the losses is one that might surprise you: I’ve lost my gender.

My gender was usually clear to anyone paying attention. A tomboy as a child, I grew into a recognizably butch-y lesbian—masculine enough to be told now and then in public bathrooms that “this is the ladies room,” yet partial to earrings and colorful scarves. When Janet and I went sporting about New York City in the spring of 2000, she stylized her femininity with short skirts and shimmering red high heels, while I put on my black leather jeans and smartly polished red cowboy boots. As we walked together hand in hand, a guy on the sidewalk once yelled after us, “You’re both lesbians!” It was a phrase that quickly became for us the shorthand for stepping out and having fun. The summer before my accident, we were headed for a festive dinner in Provincetown, dressed to the nines, when a guy sitting on a porch called out, “You sexy things!” Oh, yes.

Being recognized as a sexual couple affirmed the life we were making together. Think about it. When you prepare for a special event, you make time in front of the mirror to ensure that others will see you as you wish to be seen. So what do you do when others just stop looking?

One of the challenges of disability is that strangers often simply overlook those who live with disabling impairment. It’s easier, apparently, simply to see The Wheelchair and turn away from the person. When they do look, they see the disability and disregard everything else—as happened in the airport. If the body says all there is to say about gender, and my body is so different from what it was, who am I now? The gray-haired man seen at a glance by the three NSA agents who, like so many people, see Janet as my caretaker and not my lover? A far cry from “You’re both lesbians.”

Some people are still able to read my butch gender as part of their first impression. They get it right. They see beyond The Wheelchair. Last year, when we were moseying around a gay neighborhood in Washington, D.C., we were greeted with, “Well, hello, ladies,” by an unmistakably queer shopkeeper as we entered the store. What a relief!

Human beings are social animals. Overlooking people with disabilities makes it easy to leave in place barriers that block access and narrow standards of ability that dumb down our understanding of what people have to offer.

Think again, the next time you meet someone in a wheelchair, or using a white cane, or walking down the street in shorts and a prosthetic leg. Take a second look.

Christina Crosby is a professor at Wesleyan and the author of A Body, Undone: Living On After Great Pain.
Illustration by Stephanie Birdsong

Reader Responses to Others Stop Looking