Rosemarie Eva Feigl was just fourteen in 1940, when Martha Dickie Sharp ’26, a social worker, and  her husband Waitstill Sharp, a Unitarian minister, helped the Jewish refugee get safely to New York City. 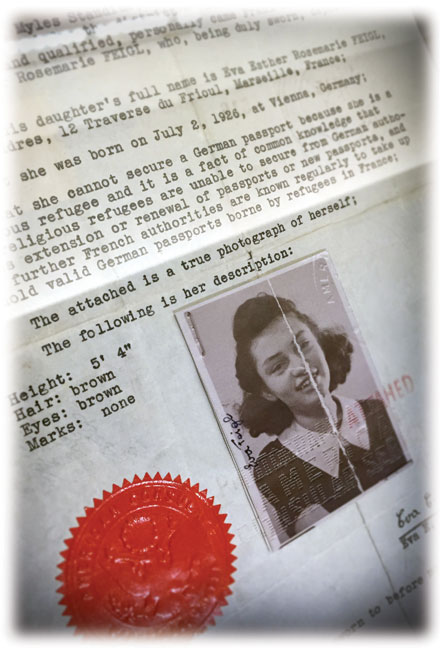 “Martha Sharp saved my life,” Feigl told a crowd in 2005, when Martha and Waitstill were posthumously included as “The Righteous Among Nations” at Yad Vashem, the World Holocaust Remembrance Center in Israel. Martha Sharp, whom a reporter once described as “the guardian angel of European children,” was the first U.S. woman to receive this distinction, which recognizes non-Jews who saved Jews during the Holocaust.

During World War II, the Sharps left their children—including professor emerita and archaeologist Martha Sharp Joukowsky ’58—behind in Wellesley, Massachusetts, and risked their lives bringing hundreds of European children to safety and freedom.

The John Hay Library displayed numerous related documents this fall, including a 1940 thank-you note from Feigl and the travel document at right.

In September, Defying the Nazis: The Sharps’ War, a film by Ken Burns and the Sharps’ grandson Artemis Joukowsky III, premiered on PBS. It featured the voice of Tom Hanks as Waitstill and Joukowsky’s friend Marina Goldman as Martha.