Working in England on Steven Spielberg’s upcoming sci-fi movie Ready Player One over the summer, dialect coach Thom Jones taught British actors to sound as if they’re from Ohio. But Jones, Director of Voice and Speech in the Brown University/Trinity Rep MFA program, is especially renowned for his mastery of the elusive Rhode Island accent. 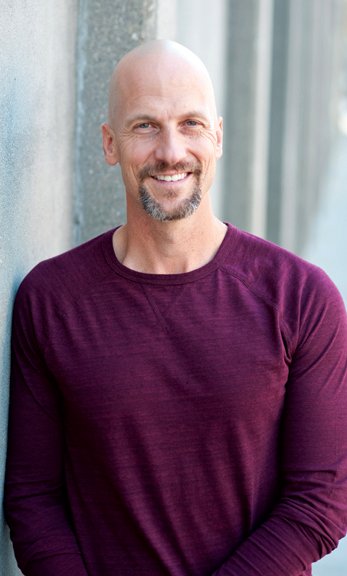 Last fall Jones trained actor Miles Teller to sound like Rhode Island boxer Vinny Pazienza in the fact-based comeback drama Bleed for This, which opens in November. “The filmmakers set up production offices in Warwick, which is said two ways in Rhode Island,” Jones points out. “Some people say ‘Warrick,’ other people pronounce it ‘War-wick.’ That’s the kind of stuff I keep in my brain. It’s sort of crazy.”

Before joining the Brown faculty in 2002, Jones, a Florida native, studied acting at Purchase College’s Conservatory of Theatre Arts where he “neutralized” his southern accent and conquered the International Phonetic Alphabet. Jones recalls, “I was particularly talented in this funny little area of voice and speech, so when I graduated they asked me to teach. Even as a kid I liked to record people and do their voices, so I’ve always been a little bit of a natural mimic.”

On Bleed for This, Jones and former student Samara Bay ’06 MFA, now a Los Angeles–based dialect coach herself, used changes in vocal placement, phonetic sound changes, and an understanding of rhythm and musicality to transform cast members Teller, Katey Sagal, and Irish actor Ciarán Hinds into working class Italian-American characters from Cranston, Rhode Island. “Rhode Island dialect is tough to get right because it sits between New York and Boston,” Jones explains. “People tell me, ‘It’s terrible the way Rhode Island people talk. As a speech teacher, doesn’t that drive you crazy?’ And I go ‘Are you kidding! It has so much character!’”

When Bleed for This filmed on location outside Providence last fall, Jones was on set to wrangle wandering accents. “Sometimes actors forget to do the accent because they’re thinking about a lot of different things at once,” Jones says. “Especially when you’re doing a highly emotional scene, that’s when your original way of speaking comes forward.”

On the phone from his London hotel room, Jones glided into his native good ol’ boy drawl, then shifted to a sharp Dolly Parton–like twang, trotted out a posh British accent, and, for contrast, impersonated an up-speaking Australian.

“Frankly,” he says, “I could probably do dialect coaching full time, but the thing that keeps me coming back to Brown is this intense intellectual curiosity the students have, and their compassion. I love being around people who are that open-hearted.”

Reader Responses to Talk This Way