August 10
The first two races for the Nacra 17 class were held this afternoon. Louisa, who crews, and Bora Gulari, the skipper, were 11th out of the 20 boats at day’s end. I am here with Caleb and Thea—”the Rio Trio.” Spectators could choose to watch on a “big screen” or sit on the beach, with half the crowd doing each. I brought some high-tech stabilizing binoculars, so I found a great spot on the deep white sand and pretty much stayed glued to the Nacra with the American flag on its sail. When I looked up, a shore bird with only one leg worked the wave wash for tidbits. Thea and Caleb decided to watch the screen. The weather was overcast and the wind was spotty, some boats sitting still while others caught little power gusts. 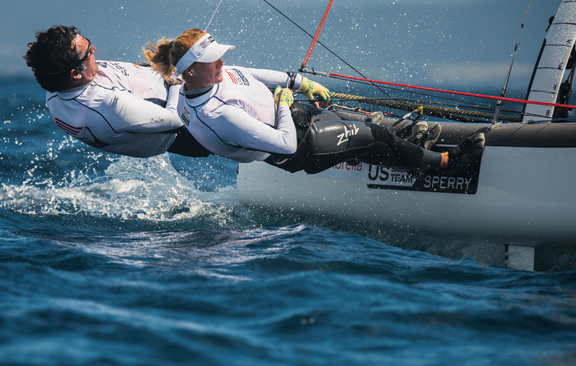 Imagine the feeling on our USA Nacra as I watched them stopped (it’s hard to stop a catamaran) while boats flew by oh-so-close with the favorable wind. There was a very long interval between the first and second races as the wind shifts kept changing the race course. We had some rain and then they cancelled the scheduled third race, so they will have to do a makeup.

Rio is a unique geological place. It is an almost secret bay from the ocean, spectacularly opening from the Atlantic to towering peaks and large tranquil waters for a mariner’s safe haven. And, once outside Guanabara Bay, the beaches: Copacabana and Ipanema, are wonders of soft sand and perfect waves. It is not Rio’s fault that after three days we still don’t have our luggage. Just stay upwind of us!

August 11
The Nacra fleet got in their three races plus the makeup for yesterday. They raced in an area of the Bay where there were no opportunities for spectators to view the racing. On the advice of the U.S. Sailing people the Rio Trio went to “The Family House,” a site in an upscale hotel set aside for the athletes’ kin to congregate. There were video screens but no cameras on the Nacras. Then U.S. Sailing gave us some grim reports on Bora and Louisa: they were having unspecified problems with the boat’s rigging and had to sit out the first race. Tomorrow is a scheduled lay day.

The high point was to see Peter Weiss, from Barrington, R.I., and his family. Anders Weiss ‘15 competed on the rowing team in a double. His story is similar to Louisa’s: a fierce drive to make a go of a sport he was very good at during his Brown years and, the next thing you know, Olympics. Anders’s shell did well but their Games are over without the podium moment. Even Michael Phelps got blanked in his first Olympics in Sydney. But he had had a taste of this nectar, competition at the pinnacle. The “thrill of victory” might only be matched by having your suitcase arrive after four days of the same clothes.

August 12
There were no scheduled Nacra 17 races today, so Caleb, Thea, and I spent the afternoon with Louisa. We met her at the sailing venue near where she had gone for physical therapy.… Yesterday’s equipment failures were really tough. Twice the skipper trapeze wire broke: once on the starboard side in the first race and next on the port side in the third race of the day. Bora dropped into the water, and the helmless catamaran capsized before Louisa could grab the tiller. She got banged up in the process. Obviously mentally, too.

August 13
Today was flawless weather, and Louisa and Bora put down finishes representative of who they are: a ninth, a second, and an eighth. The trapeze issues have been resolved! Now they stand 12th overall. We watched from the top of the giant thumb of rock that is Sugarloaf. There were lots of people with their scopes and binocs settled in at the railings. Occasionally, delightful squirrel-sized monkeys—marmosets—scurried by. It was fun to be there watching the Nacras—these boats are like Formula One cars skimming over the surface.

August 14
Needing a good last race today, Bora and Louisa delivered with a clutch third! That puts them in the Medal Round of top ten to be held Tuesday. Yay!!! Huge climb back by the gritty American sailors!

August 16
The Nacra Medal Races were held off the main viewing beach. I didn’t see the one-legged shore bird, but a large sea turtle swam by. I couldn’t have been more proud to see Louisa’s athleticism, working the lines and daggerboards as they flashed by the shore. Once their turn came, Bora did his usual brilliantly cool helmsmanship, and they again beat a lot of very good boats, including the French, finishing fourth, for an overall eighth!

August 18
Our plane home leaves tonight. There are so many life decisions and sacrifices made to compete at the top, and for some sports, such as sailing, the Olympic Games are everything, almost the only thing. Louisa says the hardest question is “What are you going to do next?”