She may live in a city where the car is king, but Seleta Reynolds ’98, general manager of the Los Angeles Department of Transportation (LADOT), clearly hasn’t gotten the memo. 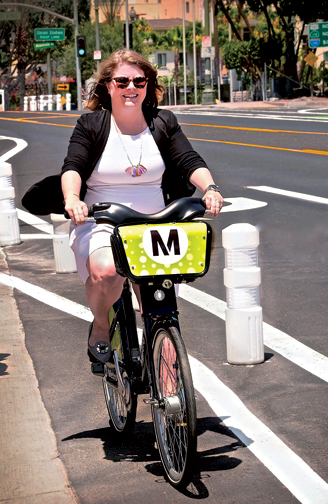 “We have one car and it’s, uh, I can’t even remember what it’s called,” Reynolds says with a laugh. “It’s like an Acura. My husband is a stay-at-home dad and he takes the girls around. That’s kind of the function it serves.”

As head of the organization charged by Mayor Eric Garcetti with reimagining the way the city circulates and congregates along its 7,500-mile network of streets, the biggest in the nation, Reynolds is something of a commuter apostate by California standards. She rides her bike or takes a twenty-minute bus ride to her downtown office, relying on ride-hailing services such as Uber and Lyft, light rail, and the subway to reach points farther afield.

Reynolds’s job, which she has held since 2014, is to ensure that Los Angeles residents have equitable access to a variety of transit options. LADOT is in the process of expanding bus service and bike lanes, while also promoting walking. Transportation planners in other traffic-choked cities are watching.

“I’m not interested in telling people that they shouldn’t drive,” says Reynolds, who is also president of the National Association of City Transportation Officials. “What I am interested in is making sure that they have as many choices as they need, and that those choices are affordable and safe.”

Reynolds credits Brown with teaching her to be a “critical and strategic thinker,” a vital talent given her current role. For example, she is shepherding the city’s Great Streets Initiative, an effort to recast neighborhood thoroughfares as pedestrian- and bike-friendly centers featuring more public space and art installations. It’s an approach she knows well—Reynolds previously launched a bike-sharing program for the San Francisco Municipal Transportation Agency.

In Los Angeles, she’s also leading efforts to design safer streets, including instituting “scramble” crosswalks, in which pedestrians cross in all directions at once, including diagonally, as a way to help the city meet Vision Zero, which aims to have zero traffic deaths by 2024.

Reynolds’s career in transportation came about largely by happenstance. After graduation, she followed a roommate to the Bay Area, where she took “whatever kind of job I could land.” She got an internship with the City of Oakland and ultimately became the city’s bicycle/pedestrian coordinator. Reynolds then spent a decade at a San Francisco consulting firm that worked on transportation issues.

“Los Angeles is in the process of pivoting from being a car-dependent culture,” she says. “You have to get a new playbook if you want a different outcome.”

Reader Responses to Scrambling at Crosswalks