At the start of her senior year in high school, after taking a six-week computer coding class, Sophie Houser ’19 and her friend Andrea Gonzales launched Tampon Run, a video game in which you throw tampons at enemies who want to take them away. 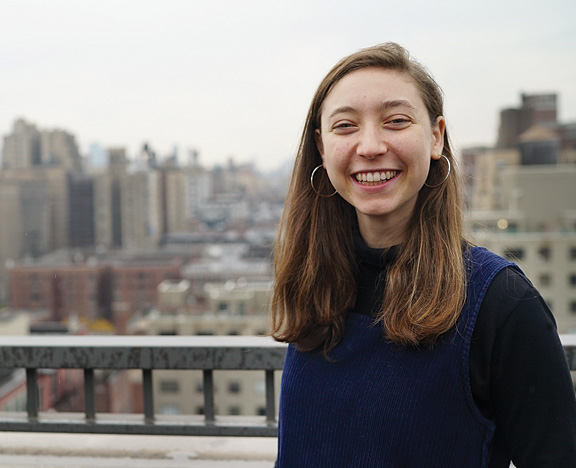 Avery Houser '12
With a book and a TEDx talk, Sophie Houser '19 hopes to inspire girls to discover the liberating effect of computer language.

The idea was to destigmatize menstruation, and it went viral overnight. “My mom called me the next day and said, ‘Where are you? You’re trending!’” Houser remembers. “We started getting these tweets and e-mails from people who said the game made them feel more comfortable with their periods or that it inspired them to learn how to code.”

Teen Vogue took notice, and she and Gonzales even delivered a TEDx talk, “What Tampons Have to Do with Tech.” Girl Code, a book about their experience, was published in March. The BAM spoke to Houser, who is concentrating in computer science and literary arts, a few weeks after she returned from her six-city book tour.

It started off as a joke of an idea. But then it turned into a conversation about our personal experiences, being ashamed to buy tampons, guys in high school literally walking away if girls were talking about menstruation.

When we were doing research for the game, we came to realize that the menstrual taboo was much larger than what the two of us had experienced. In places like Nepal there are women who have to live in very unclean and unsafe shacks while they’re menstruating because menstruation is seen as that dirty. And in India there are girls who drop out of school because they don’t have the means to deal with their period while they’re at school or they’re just too ashamed to go to the bathroom and change their pad or their tampon. So actually it has much larger implications.


Your book reveals that you were once desperately shy.

Yeah, I would never raise my hand in class. I would shake and cry before very small class presentations, and most of that was because I thought nothing I had to say was worthwhile. Now I love to meet strangers. I love to be in new situations, and it’s partly what I learned through coding.

In coding you have to fail over and over again. Also, because of the success of the game I found myself in a lot of really uncomfortable situations, going to award ceremonies, talking to hundreds of people, meeting new people, and I realized I really enjoyed being uncomfortable. And that every time I failed, which happened often, it wasn’t so bad, it wasn’t so scary.

So what was your most recent failure?

I fail all the time in computer science. I literally got a 40 in my last midterm in CS 22. I really did dismally. I spend a lot of time going to TA hours, and I stay up late working on my CS homework, but at this point I know that is just what coding is.

But aren’t you good at math?

I was never a math person. I assumed that I would be a history or English major in college. What I found is that coding is not math. Coding is really all about logic and problem-solving. That’s basically what I do when I write an English paper. I look at what is my thesis and what am I trying to prove, how can I break that down into its pieces, what’s the argument here, and what’s the best way to argue that? So I see them as similar skill sets.

What do you hope people take away from your book?

I hope it inspires girls and really anyone who reads the book to find their voice and use it, and to use code as a tool to do that. It’s an incredibly powerful tool. It can reach millions of people so quickly, and you can be anybody—you can be two sixteen-year-olds behind a computer with six weeks of coding experience. And you can still make something that can actually have impact.

Reader Responses to Coding for Change