“I’m this sort of short, balding Jewish guy, and I’m going to play roles that are good for me,” declares Peter Jacobson ’87. Funny, smart, and fierce when the role calls for it, Jacobson is speaking from the Brooklyn set of the FX spy drama The Americans as he waits for his next scene as FBI Agent Arnold Wolfe. 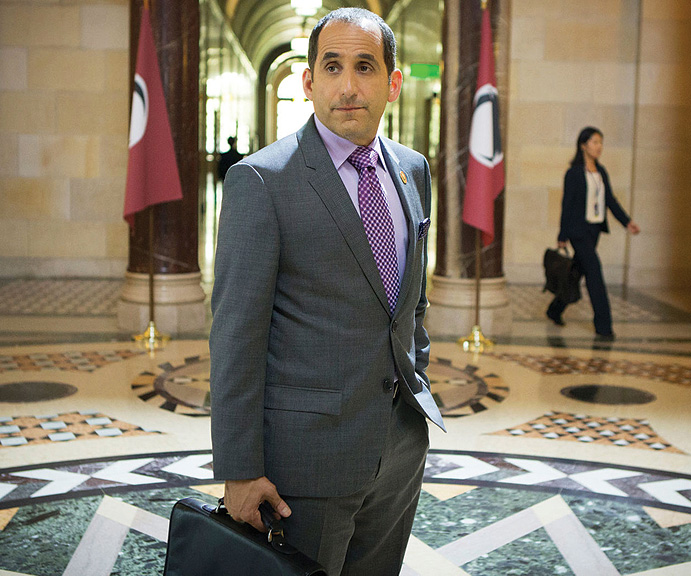 “I enjoy playing Proxy, because he’s just as conflicted and human as he is wily and manipulative,” Jacobson says. “Strangely, that’s been my thing: I play some kind of dastardly guy.”

In his best known role to date, Jacobson actually played a relatively nice guy opposite Hugh Laurie’s prickly title character in the long-running TV series House. Commuting for five years to Los Angeles from New York City, where he lives with his wife, Whitney, and their fourteen-year-old son, Manny, Jacobson reveled in the role of Dr. Taub.

“I had a great time working with Hugh once I stopped being scared of him,” Jacobson laughs. “He set the bar so high, it was a bit of a wake-up call for me.” When House went off the air in 2012, Jacobson just kept working. “I wouldn’t say House changed my career in any drastic way,” he says. “For me, it’s always been a nice, gradual build.”

The build began at Brown. Jacobson, son of famous-in-Chicago TV political commentator Walter Jacobson, studied political science but spent most of his time acting in Production Workshop student productions. “I played Diabetes in Woody Allen’s one-act God, and it was so much fun I really got in a groove,” Jacobson recalls. “I used to do at least four plays a year, which is kind of nuts when you think about it.”

Jacobson often shared the stage with older students Laura Linney, Tim Blake Nelson, and Willis Sparks. All three went from Brown to Juilliard, and Jacobson followed a year later. He laughs, “I was thrilled that I could put off ‘life’ for another four years.”

Post-Juilliard, Jacobson landed his first union gig in The Comedy of Errors at Shakespeare in the Park. As supporting roles in movies and television streamed in over the ensuing decades, he came to embrace “character actor” as a noble profession.

“When you’re younger, you think to yourself, ‘Hell, I can play anything,’” Jacobson says. “I’m smarter than that now. I want to play as many different kinds of roles as I can, but I also know I’m not going stretch too far beyond how Hollywood perceives me. I’ll continue to wear a lot of suits and ties and sit behind a desk, but as long as it’s a smart character in a good show with good writing, I don’t care: I’ll do it forever.”