At the end of his eponymous adventures, when “the sinteenery’s just a week away,” Huckleberry Finn told us he was planning to “light out for the Territory,” and for more than a century it’s looked like no author could see far enough over those Black Hills to continue the story. In his new novel, Huck Out West, University Professor Emeritus of Literary Arts Robert Coover picks up the story and gets the entire yarn going again, seemingly straight from Finn. 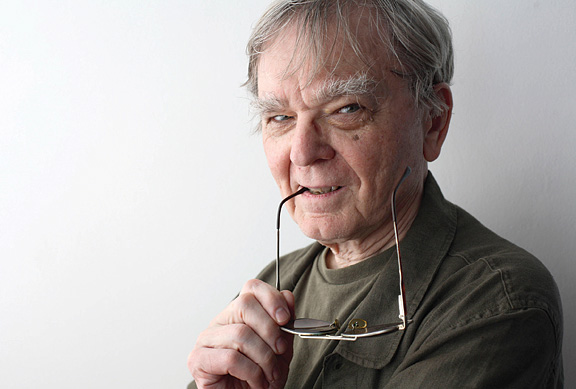 Basso Cannarsa/Opale
Robert Coover's new novel is only his second with a first-person narrator.

Of Coover’s eleven novels—which complement a score of novellas and story collections—only one other is told in the first-person: Gerald’s Party was a metafictional mystery whose narrator’s soirée is only mildly disrupted by a dead body “none of us noticed” at first. Huck’s point of view is more realistic, but no less strange. Now a luckless prospector satisfied with his pipe and jug, his main occupation is jawing with a Lakota man named Eeteh in a mighty peaceful place known as Deadwood Gulch. Their peaceful existence ends with the Black Hills gold rush that brings a million emigrants “crowding up the crick shores and hillsides…and then another million comes piling in right afterwards with their wagons and pack mules to try to make money off the first million.”

When he returns home to find three raggedy men frying a fish from his own trotlines, Huck disposes of them with one of his best stretchers: They can keep the tepee, because he “don’t use it no more, not since my brother Jacob died in here.” Smallpox? the unwelcome guests want to know. “Warn’t nothing small ABOUT it! Jake had the gashliest sores you ever seen….”

Despite side misadventures as a migrant guide and a stint breaking horses for General Hard Ass (Custer), Huck keeps returning to Deadwood Gulch. It will take Tom Sawyer half the book to show up, but it’s worth the wait to see him throw on the style. If the cartoonish rescue he effects winks from the brothel of postmodernism, we are nevertheless as gobsmacked by Tom’s technique as his old pard Huck: “Only one man I knowed could do that.” (We’re also reintroduced to childhood friends Becky and Jim.)

Yearners for allegory will not be disappointed. With shoutcaps seemingly out of a belligerent Twitter feed, Tom, now armed with the LAW, remakes reality along the lines of something he calls “the UP’N UP, accorded to the BOOK! The AMERICAN book!” Cronyism, massacres, and mock trials that produce mass hangings pile up, while Huck’s becomes our own inner voice: Did America have to happen like this?

Coover was my teacher at Brown and remains a friend, but I am also a novelist: I understand how tricky it is to pull off such an intimate account of a tragic history. If there’s one real escape from this nightmare West, for readers and the hero we get to know so inwardly, it’s Huck’s magic-real rides righting wrongs on his big dark stallion, Tongo. Huck Out West is a ripsnortin’ pioneer-days adventure and a tonic for these times.